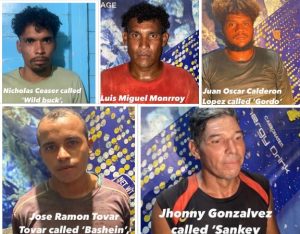 A Guyanese man and three Venezuelans were Wednesday arraigned for the murder of two Guyanese men at a mining camp at Blackwater, Region Seven.

They appeared at Georgetown Magistrate’s Court before Magistrate Mr. Delon Bess where the charge was read to them, they were not required to plea and were remanded to prison.

Sixty-two year-old Bachan and Niles were found dead at a mining camp earlier this month at Blackwater Backdam, Cuyuni.

The matter was transferred to the Kamarang Magistrate’s Court for September 20, 2021.

The bodies of Bachan, who was the General Manager, and Security Officer Niles were were found in  their hammocks in the watch camp.

An AR 15 that Niles was armed with is reportedly missing. The mining camp is owned is Kevin Singh.