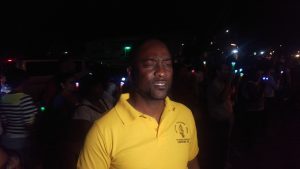 President of the Guyana Teachers Union (GTU), Mark Lyte late Wednesday night announced that that workers’ organisation was on standby to take legal action against government  if teachers are prevented from entering their workplaces because they have not been vaccinated or tested negative for the coronavirus.

Mr. Lyte said GTU would be asking the Guyana government to provide free PCR tests to teachers who do not want to take the vaccine rather than they footing the bill at private laboratories.  The union official also said the GTU would enquire whether Pfizer vaccines could be administered to teachers who prefer that jab.

The GTU is also vehemently opposed to the Ministry of Education’s position for the reopening of in-person classes at all levels from September 6, 2021 that teachers must be vaccinated or take a PCR test each week  but if they do neither they would have to stay home and be marked absent.

Mr. Lyte advised teachers to do all their pre-term preparations and report for duty every day even if they are barred from entering the compound on all occasions because it would be illegal for them to be locked out of their workplace. “We are concerned about the missive that you would be marked absent because if you are marked absent, then that has implications for your salary. We are also aware that if an employee shows up for work and is denied access to their place of work by the employer, then that employee cannot be marked absent or cannot be considered absent because you are available for work,” the GTU President told the teachers.

Mr. Lyte added there is no provision in the employment conditions does not say that they must take a COVID-19 vaccine before they are allowed to work. The top union official said such conditions would be a breach of teachers’ constitutional rights and he vowed that legal action would be taken to ensure that none of them loses salary if they turn up for work.

“We believe that any attempt to deny you access to your place of work will be a breach of your constitutional right,” said Mr. Lyte. He noted that the Ministry of Education was concerned about learning loss, while at the same time would be preventing them from entering schools to teach.

GTU General Secretary Coretta Mc Donald also raised a number of grave concerns about the possible spread of the virus by students and the challenges that teachers would face in managing nursery school and special school students. She said that even under normal circumstances, those two categories of teachers are very difficult to manage and would be even harder for teachers who would have to spend most of the day managing the wearing of face masks. “For those of us, who are nursery school teachers, you know that when we hadn’t COVID, it was hell to get them to settle for a while, much more with COVID and a mask on their face. Those children are very inquisitive  and they are going to be pulling and their going to be tugging and by the time you know it, somebody mask burst,” he said.

The GTU President called on teachers to start making placards to participate in street protests. Mr. Lyte insisted that every effort be made to ensure that only teachers’ issues are addressed and they are not mixed with other matters such as politics.

2021-08-25
Denis Chabrol
Previous: Venezuelans, Guyanese charged with murder of two Guyanese at mining camp
Next: Pfizer’s COVID-19 vaccine to be rolled out at each school, community