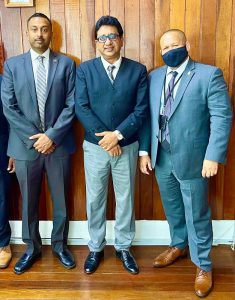 Mr. Nandlall says the team updated him on a number of areas in the legal sector that the US wants support for.

“The US team updated the Attorney General on a number of areas in the legal sector that the United States Government will enlist the support of the Attorney General’s Chambers, in particular organized financial crimes, extraditions, deportations and the prosecution of fugitives who may have committed offences in either Guyana or the USA, or in both countries,” his Chambers said in a statement.

The Attorney General says the talks also focused on certain strategic areas which need to be strengthened, especially in the area of forensic investigations by collaboration between the two countries.

Minister Nandlall reportedly “reaffirmed the Guyana Government’s continued commitment to partner and work closely with the United States security services for the benefit of both nations as he highlighted that tackling crime is a priority of his government.”

Follow up engagements are planned flowing from the outcome of Wednesday’s meeting.

The US representatives at the meeting were drawn from the U.S. Marshals Service, Department of Justice,
New York/New Jersey Regional Fugitive Task Force as well as Special Agent Diplomatic Service, and the US Embassy in Guyana.

2021-08-19
Denis Chabrol
Previous: OPINION: Brooklyn -a stark revelation of where Guyana is
Next: Goldsmith, customers robbed of jewellery, cash