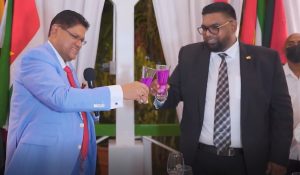 President Irfaan Ali on Wednesday night hinted that he and his Surinamese counterpart, President Chandrikapersad Santokhi hours earlier arrived at major decisions in a number of areas including oil and gas.

Addressing a State Dinner in honour of Mr. Santokhi and his high-level delegation, Dr. Ali said the bilateral  talks would continue on Thursday.

The Guyanese leader indicated that already major decisions have been made and would be made public at their joint news conference scheduled for Thursday. “We have made some very strategic decisions in the interest of Guyana and Suriname. We have decided on some joint approaches in important areas of oil and gas, environment, security, our legal system; many areas but I don’t want to take away from what would happen tomorrow (Thursday),” he said.

The two leaders are expected to sign an agricultural cooperation protocol.

The Inter-American Development Bank (IDB) has listed Guyana, Suriname, French Guiana and Brazil as being part of a natural-gas fueled electricity generation system.  CGX Energy is planning to construct a shorebase on the Berbice River to serve oil companies, even as the Saudi company, DP World has invested in a U$100 million shorebase in a joint venture with HJ de Vries Project Development N.V. and FIRM Engineering N.V on the Suriname River to serve drill-ships in the Guyana-Suriname basin.

Guyana and Suriname in recent months have been basking in major offshore oil discoveries, while at the same time seeking to assure environmentalists that they will keep their Amazon forests intact to absorb carbon emissions.

Guyana and Suriname have already issued a call for proposals to build a bridge across the Corentyne River, even as they try to keep the aged Canawaima Ferry afloat.

The Corentyne River is regarded as a major transit point for the illegal entry and exit of Surinamese and Guyanese as well as other  nationals and the smuggling of consumer goods and the trafficking of drugs and firearms. Suriname recognises its back-track point at Nickerie as legal, while Guyana does not do so for Springlands.

President Santokhi, for his part, gave no indication of what he and his Guyanese counterpart have so far agreed on but corroborated that major decisions have been made. “Today, our discussions have resulted in far-reaching decisions,” he said.

He stressed that they both have the political will to implement their decisions to foster economic growth and create investment opportunities. “The strengthening of the cooperation is based on this political will coming from the highest level of the government, coming from President Irfaan Ali and President Santokhi,” he said, adding that the aim is to involve all parties.

President Ali, meanwhile, shrugged off questions by the Surinamese media about whether the Guyana-Suriname border dispute over the New River Triangle was on the agenda.

2021-08-18
Denis Chabrol
Previous: “Saw man” shot dead after robbery in Cuyuni
Next: OPINION: Brooklyn -a stark revelation of where Guyana is