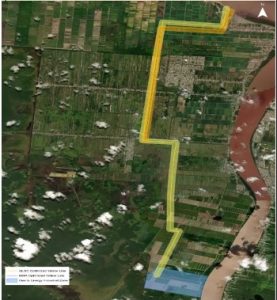 The Wales natural gas pipeline from the shoreline to Wales Development site.

The National Assembly on Monday passed amendments Petroleum (Exploration and Production) Act to allow landowners to be compensated for lands to be acquired for the laying of a 30-mile long gas pipeline from the Atlantic seashore to Wales.

Natural Resources Minister Vickram Bharrat also said a fibre-optic cable that would carry real-time data about oil production and other activities of all Floating Production, Storage and Offloading vessels and exploration drill-ships.

The 136 mile pipeline from gas to the West Demerara shore would be about 12 inches in diameter.

Public Works Minister, Juan Edghill sought to assure the House that property owners would be adequately and fairly compensated. “No citizen will be bullied. No citizen’s land will be taken away, but if for any chance the lands have to be utilised, the Constitution will be upheld where there will be acquisition based upon fair price so we don’t have an issue of issuing orders to acquire land,” he said.

However, Shadow Natural Resources Minister David Patterson cast doubt on the motive on the amendment and whether landowners would receive adequate compensation. He also said the real motive for the amendment was a recent High Court ruling that the government could not repossess lands at Wales from lessees. “They are bringing this Bill, Sir, to counteract and to deprive persons that are legally occupying the lands  of their beneficial rights to occupy free and without persuasion,” said Mr. Patterson. He disputed the stated intent of the amendment to the law to give government oversight of the licensee’s right to the land.

Minister Edghill earlier told the House that 90 percent of the land pathway for the pipeline and the fibre-optic cable is owned by government.

Mr. Patterson disputed disputed claims by government that the cost of electricity would be slashed by about 50 percent when the 250 megawatt gas-to-shore electricity plant becomes operational in 2024.  He said after considering commercial and technical losses, the US$900 million project cost and the Guyana Power and Light’s administrative and maintenance cost, the actual cost per megawatt would be at least 6 US cents instead of 4 US cents.

Public Works Minister Deodat Indar said government’s projections are that Guyana would save about US$90 million in the cost of buying Heavy Fuel Oils for the power company’s generators.

Government has been touting the gas-to-shore project as the expected source of cheap and cleaner electricity and a springboard for additional industries in value-added agriculture, fertilisers, protein and other products.