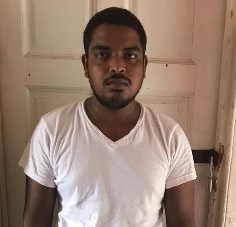 The man, who burned his girlfriend’s two-year old daughter on her vagina, was Friday jailed for 30 months.

Police say  Anil Angnoo, was arrested and was charged  on Friday with inflicting grievous bodily harm

He appeared at the Albion Magistrate’s Court before Magistrate Ravindranauth Singh, where the indictable charge was read to him and he was not required to plea.

Police said the Administration of Justice Act was applied and he pleaded guilty in the Magistrates Court instead of a preliminary inquiry to determine if he should be trialed by a judge and jury.

He was sentenced to 30 months in prison.

Angnoo reportedly said he burnt the girl because she was urinating and defecating too often.

The incident was reported to police by his girlfriend’s sister.