The pro-People’s Progressive Party (PPP) Election Commissioners have submitted an amended motion to  GECOM for the possible termination of the contracts of the Chief Elections Officer, his Deputy and the Region Four Returning Officer.

Elections Commissioner Bibi Shadick confirmed that the amended motion has been signed by herself and colleague Commissioner Sase Gunraj.

“GECOM has to be cleaned up and if we don’t start somewhere we will go no where,” she said, in reference to alleged statutory breaches during the March 2, 2020 general and regional elections.

This now paves the way for GECOM’s lawyer, Kim Kyte to submit that document to the High Court by Thursday, August 5 ahead of Justice Joann Barlow’s decision in a case brought by Mr. Lowenfield.

The amended motion now provides GECOM the option to terminate the contract of Chief Elections Officer, Keith Lowenfield instead of a summary dismissal that will require a fair hearing.

The Chief Elections Officer has moved to the High Court to block Election Commissioners Shadick and Gunraj from participating in a debate on their motion for him to be summarily dismissed because their public statements have infected the process for boats.

But Ms. Shadick has said that at least the minutes of GECOM’s last Commission meeting had reflected the fact that the motion has been amended.

Opposition-aligned Elections Commissioner, Vincent Alexander on Wednesday said there is no amended motion for the termination of the contracts of the Chief Elections Officer, Keith Lowenfield before the seven-member election management authority. 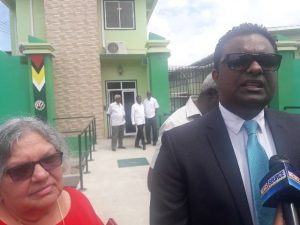 Justice Barlow, during Wednesday morning’s hearing. made it clear that she could only consider the facts presented to the Court.

Issues to be considered are whether Mr. Lowenfield’s application is premature and if injunctive reliefs are usually granted for contractual issues.

Ms. Kyte, in requesting permission to file a supplementary affidavit, noted that the circumstances have overtaken Mr. Lowenfield’s application on the grounds of the need for a fair hearing before possible summary dismissal but about the termination of contract.

Mr. Lowenfield, Ms. Myers and Mr. Mingo have been charged with several offences related to electoral fraud. A number of officers of the People’s National Congress Reform (PNCR) have also been charged.

The PNCR-led APN+AFC has instead accused the PPP of massive electoral fraud, but a recount of the votes cast has put a shadow on the initially declared results for Region Four.