GYD$7.3 billion direct cash transfers to be made to thousands of flood-hit farmers 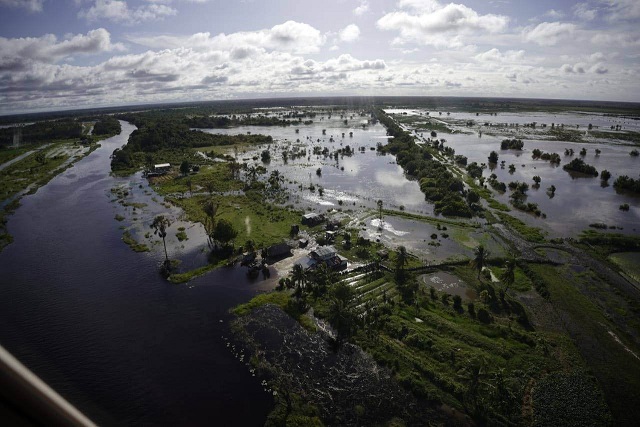 “I am aware that this assistance will go a long way in bringing relief. However, it can never compensate for the emotional and social lost, which I saw and experienced firsthand,” he said in an address to the nation.

“Having regards for the massive disruption in the economy and household level, particularly the agriculture sector, the government committed to direct transfers to households and farmers to allow them in the first instance, to return to some level of normalcy in their homes whilst supporting the agriculture sctor to return to productive capacity so as to mitigate against potential food shortages whilst at the same time supporting the farming community,” he added.

The President said 2,000 rice farmers whose 50,000 acres of land were affected by the flood would get  a total of GYD$3.2 billion in direct cash transfers. “The rice sector also suffered heavily,” he said.

In addition, to this support, 60,000 bags of seed paddy would be made available.

He explained that while several large farmers were severely affected, especially in rice and poultry, the ceiling of assistance will not exceed $10M for individual farmers. “As you are aware, $10B was approved in supplementary provisions to address these needs,” he said.

The President said 2,000 livestock farmers in the categories of subsistence, small, medium and large-scale Medium farmers, and large-scale farmers would get GYD$600 million in direct transfers.

He said that in addition to those direct transfers, the Ministry of Agriculture and GLDA would be assisting through genetic improvements, drainage and irrigation works, technical support, and extension services to the approximate value of GYD$500M.

“In addition to this support, ongoing infrastructural works will continue to rebuild damns, farm-to-market access roads, Hinterland roads, mining roads, community roads, drainage systems, and other infrastructure that were destroyed or deteriorated during the floods,” he added.

He said the total, socio-economic impact assessment is currently being examined by the United Nations Economic Commission for Latin America and the Caribbean (UN ECLAC).  “This would give us an overall understanding as to the cost of this flood to the economy, regions and communities,” he said. Figures, he said, show that the flood has dented the sugar industry more than GYD$1.5 billion in losses.

Figures show that approximately 52,000 households were directly affected and the agriculture sector suffered the greatest loss with 92,000 acres of farm and farmlands completed affected.

The President also promised that his administration would work on an aggressive national drainage plan in the context of climate change to cushion the impact of further climate events and disasters.

He thanked the thousands of Guyanese here and in the Diaspora, international agencies, and friends in the CARICOM community and elsewhere for their kind support during this period. He also singled out the Ministry of Agriculture, the Civil Defence Commission, and all the other sectors that “worked long beyond the call of duty to bring relief.”