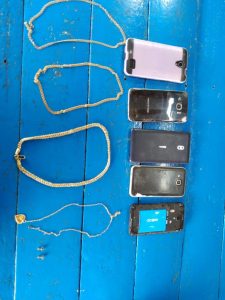 The items that are believed to have been stolen from the grocer at Rockstone Junction in Region 10.

The three suspects in the robbery of a 57-yeat old  businesswoman and her grandson at their grocery at Rockstone Junction were hours later arrested and several of the stolen items were recovered, the Guyana Police Force said.

They are a 29-year-old man of Georgetown and two 25-year-old men of Linden.

Police said the arrest was made at about 1:15 PM Saturday at Konawaruk Junction in Region Eight  (Potaro Siparuni). 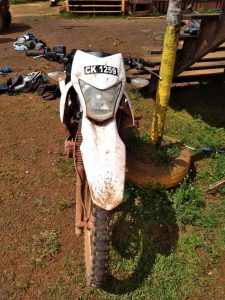 One of the motorcycles that one of the suspected bandits was riding.

“The suspects along with the said phones, yellow metal jewelry, motor cycles and suspected cannabis were then escorted to the Mahdia Police Station,” police said.

Investigators said the three who are now in custody were riding two XR 150 motorcycles. 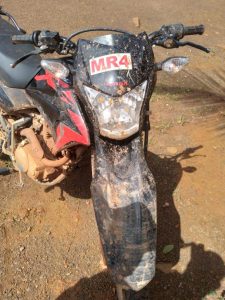 The other motorcycle that was allegedly use by the robbers.

Lawmen said they also found 1.2 kilogrammes of marijuana in a haversack that one of the men was carrying.

The suspects were placed into custody at the Mahdia Police Station pending investigation.