Way cleared for law reform with appointment of seven-member commission 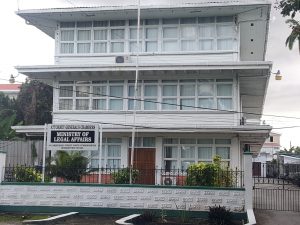 A seven-member Law Reform Commission has been appointed to advise on revamping Guyana’s laws as it sees fit under a US$8 million project being funded by the Inter-American Development Bank (IDB), Attorney General Anil Nandlall announced on Saturday.

The Chairman is Retired Justice of Appeal B. S. Roy and the other members are Attorneys-at-Law Teni Housty, Clarissa Riehl, Emily Dodson, Roopnarine Satram, Deenawatie Panday and educator Brian O’Toole. In keeping with the Law Reform Commission (Amendment) Act No. 2 of 2021, President Irfaan Ali, has approved for appointment the Chairman and Members of the Law Reform Commission.

“The Law Reform Commission is an advisory body to the State and can recommend to the Government of Guyana amendments to existing laws, new legislation, and the repeal of existing legislation,” Attorney General Anil Nandlall said in a statement. “A Law Reform Commission in Guyana is long overdue and exists in most Commonwealth countries. This institution is expected to ensure that the country’s laws are updated regularly and embrace new and emerging legislative trends across the world,” he added.

The nominees have been chosen after consideration of recommendations received from the various stakeholder organizations, consulted pursuant to the provisions of the Law Reform Commission (Amendment) Act No. 2 of 2021, and in accordance with the said Act.  Mr. Nandlall had several weeks ago publicly ruled out the involvement of the Guyana Human Rights Association in the Law Reform Commission because of the stance that had been taken against the People’s Progressive Party Civic administration.

Mr. Nandlall said the  IDB would be funding the functioning of this Commission for a specified period and the Government of Guyana is expected to take over funding thereafter.

The Attorney General’s Chambers explains that Law Reform “ensures that the country’s laws are updated at periodic intervals, and captures and embraces the aspirations, exigencies, social maladies and vicissitudes of the society as it evolves. ”

The Commission will be operating out of a Government of Guyana building located at Lot 91 Middle Street, Georgetown. A Secretariat for the Commission has already been established and staffed. Members of the Commission are expected to be sworn in shortly.

The then coalition A Partnership for National Unity+Alliance For Change had rented a building for the Commission but no work had been done because the commissioners had not been appointed.