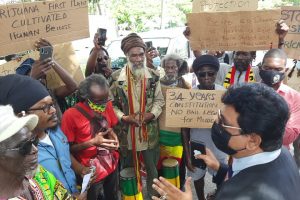 The group of Rastafarians and Attorney General Anil Nandlall exchange views about penalties for the possession of marijuana.

The Inter Religious Organisation of Guyana (IROG) on Saturday endorsed the decriminalisation of the possession of small amounts of marijuana for religious use by Rastafari, and at the same time urged authorities to ensure there is no widescale abuse of the plant.

“While the IROG is not calling for indiscriminate smoking of marijuana to be legalized, it calls on the
government to consider comprehensive law reform to recognize and respect the religious rights of the
Rastafari community,” the organisation said.

The IROG says the Rastafari community, through the Guyana Rastafari Council, has been a member organisation of the IROG for the last fifteen years, and in 2008 Rastafari was recognized by the United Nations as one of the five main faiths in Guyana.

The IROG says it was made aware of a recent protest outside the Attorney General’s Chambers by members of the Rastafari community, calling on the government to urgently amend the laws of Guyana to recognize and respect their religious and cultural rights, was brought to our attention at a  recent statutory meeting.

A bipartisan House parliamentary select committee has since been established under the chairmanship of the Attorney General Anil Nandlall to examine proposed amendments to the Narcotic and Psychotropic Substances Act.

The Rastafarians note that they are liable to imprisonment for being in possession of 15 grammes or more of marijuana but this infringes on their religious practices.

According to the IROG, “The Rastafari community believes that cannabis is the tree of life spoken of in the Books of Genesis and Revelation and that it possesses the spirit of God like the tree that Moses encountered on the mountain. Secondly, in keeping with the ancient religious tradition of burning incense in the sacred temple as a fragrance pleasing to God, they acknowledge that the body is the temple of God and so burn cannabis as incense of sweet fragrance that is pleasing to God and is offered up with thanks and praises as is reflected in the Book of Revelation 8:3-4.

According to the Vedas, cannabis was one of five sacred plants and a guardian angel lived in its leaves. The Vedas calls cannabis a source of happiness, joy-giver, liberator that was compassionately given to humans to help attain delight and lose fear. [See Atharva Veda, Book 8, Hymn 7, Verse 20] “