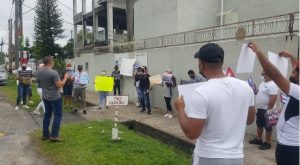 A group of Cubans in Guyana on Monday afternoon protested outside the Cuban embassy, in solidarity with their fellow citizens back in Cuba who are involved in countrywide protests there.

Citizens of the Cuban communist -run Caribbean nation, in a historic, move have taken to the streets in Cuba to protest economic hardship in the country, lack of democracy, food and COVID-19 vaccine shortages.

Their countrymen in Georgetown protested the Georgetown embassy and spoke of the hardship and human rights violations they are enduring.

“We are here in a peaceful meeting in support of our friends, our family, our brothers in Cuba. They are fighting in this moment for freedom for human rights because in Cuba we don’t have nothing. We don’t have food, we don’t have medication,” a woman told News-Talk Radio Guyana / Demerara Waves Online News from the picket line. She added that Cubans in Cuba are dying due to the socialist regime. 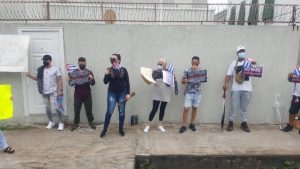 The Spanish-speaking nationals said several of them have been living in Guyana for more than three years in search of a better life.  They spent all afternoon chanting “Freedom to Cuba”, “Freedom” and waving placards in Spanish and English.

Cuba’s President Miguel Diaz-Canel on Monday blamed U.S. sanctions, that were tightened in recent years, for the economic woes like medicine shortages and power outages that fueled unusual protests this weekend.

The United States stands with the people of Cuba in their call for freedom and relief from the coronavirus pandemic and decades of repression, President Joe Biden said on Monday, according to Reuters News agency reports.