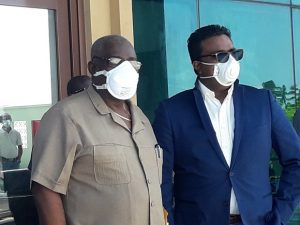 Chief Elections Officer Keith Lowenfield is asking the High Court to block Elections Commissioners Sase Gunraj and Bibi Shadick from participating in hearing a motion for his immediate dismissal on the grounds that he needs a fair hearing.

Mr. Gunraj told Demerara Waves Online News/ News-Talk Radio Guyana 103.1 FM that he envisages the seven-member Commission proceeding with debates on the motion next week Tuesday, July 13 because there is nothing to stopping them from doing so.

“There is no injunction and there is no impediment to us proceeding. There is absolutely nothing and obviously I will oppose any application for this to be used  a bar to proceed with the motions,” said Mr. Gunraj, an Attorney-at-Law.

In court papers seen by Demerara Waves Online News/ News-Talk Radio Guyana 103.1 FM, he wants the High Court to make a declaration that GECOM is also bound to provide Mr. Lowenfield with the protections of the rules of natural justice.

The Chief Elections Officer, through his lawyer, has said that he has already submitted a ‘show cause’ response to the GECOM Chairman, Retired Justice Claudette Singh why he should not be dismissed. Further, he said the participation of Election Commissioners Gunraj and Shadick in the commission’s discussion on their own motion has “infected the deliberations of the Commission with bias.”

Mr. Lowenfield said  he has already expressed his concern in writing to the Commission Chairman by way of a letter dated June 30, 2021.

The PPP-aligned Commissioners want the trio to be sacked with immediate effect for their alleged role in electoral misconduct related to the March 2, 2020 general and regional elections.

Lowenfield, Myers, Mingo and two other GECOM officials as well as members of the People’s National Congress Reform have been charged with several fraud and misconduct in public offences linked to last year’s general and regional elections.