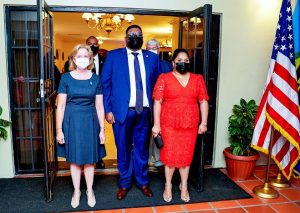 President Irfaan Ali has welcomed the United States’ rejoining of the Paris Agreement on Climate Change and the target to reduce greenhouse gas emissions by 50 percent in another nine years.

Dr. Ali was quoted by government’s  Department of Public Information as welcoming the US’s decision earlier this year to rejoin the Paris Agreement on Climate Change and applauding US President, Joe Biden’s to reduce greenhouse emissions by 50% by the year 2030.

“Guyana looks forward to working closely with the Government of the United States, to build a more resilient and sustainable post-COVID-19 future” and to combat and mitigate the adverse effects of climate change,” the President added.

The then Donald Trump administration had pulled out of the Paris Climate Change Accord.

Guyana, now an oil producer, has been criticised for allowing flaring of gas from an ExxonMobil-operated offshore production well due to faulty equipment that have been recently replaced and is being tested.

At the same time, Guyana is said to be continuing engagements with Norway to earn more money for this South American nation’s preservation of standing forests to absorb greenhouse gases and minimise the effects of climate change.

Meanwhile, the President  acknowledged the role that the US played in safeguarding Guyana’s democracy during the 2020 national election and expressed his gratitude for support at the territorial level. “We look forward to the continued support of the United States in safeguarding our democracy and our territorial integrity.”

Credit was also given to the US Ambassador for her veracity and impartiality.  The US has openly acknowledged that Guyana’s territory includes the Essequibo Region which neighbouring Venezuela claims as hers. That matter is currently before the World Court which Caracas maintains has no jurisdiction.

“We must celebrate the relationship between the United States Embassy here in Guyana led so well by Ambassador Sarah Ann-Lynch and the Government and people of Guyana. We want to thank you for your strong, resilient and faithful leadership…one in which you have lead with great integrity.”