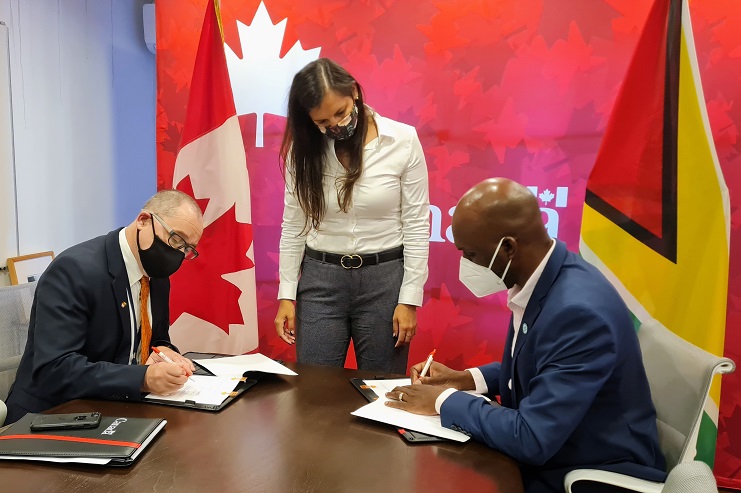 “On behalf of the Government of Canada, we are very pleased to assist Guyana in combating their flooding situation, and I just want to state our resolve to help Guyana address the immediacy of the flooding disaster and recover from it. Canada stands firmly with the government and people of Guyana during the crisis,” Berman was quoted as saying at the signing of the agreement with the Civil Defence Commission’s (CDC) Director General Lieutenant Colonel Kester Craig.

The GYD$8.4 million would go towards the purchase of emergency flood relief to the hardest-hit areas in Guyana.

Expressing the CDC’s profound gratitude for the donation, Colonel Craig called the contribution timely, highlighting that it will go a far way in benefiting many of the residents most severely affected by Guyana’s current flooding situation.

“The funding will help tremendously in our response,” Craig commented during the signing. “It is in keeping with our needs and the items that we will procure will definitely benefit the communities that are affected by the flooding.”

Colonel Craig said that the CDC is particularly grateful that many of the items covered under the funding include critical items such as the water purification tablets and water containers.

“Because of the flooding we have water contamination and having drinking water is essential to preventing any outbreak, so we place a lot of emphasis on ensuring there is potable water available to the affected residents,” Craig was quoted as saying in a CDC statement.

Commissioner Berman conveyed the Government of Canada’s empathy to Guyana as the country faces one of its biggest flooding disasters in years. Berman noted that Canada recognises the impact of an effective humanitarian response to protect the lives of those severely affected during this national disaster.

Berman further remarked that the donation demonstrates the profound friendship between the two countries, and also commended the well coordinated flooding response that has been executed since the flooding first began last month.

“I would like to commend the President [Irfaan] Ali, the government of Guyana, and the Civil Defence Commission for the leadership and coordination of the relief efforts, and we are looking forward to continued partnership as we help to rebuild Guyana through this disaster,” Berman said.

This will not be the first time that Canada has come on board to offer assistance to Guyana in disaster risk management. In 2016 and 2018, the CDC received significant contributions towards the rehabilitation of a school in Berbice for the establishing of a temporary shelter.

Additionally, during the 2019 – 2020 period the CDC would’ve again received support towards the construction of two shelters in Region One (Barima-Waini) used to assist Venezuelan migrants.