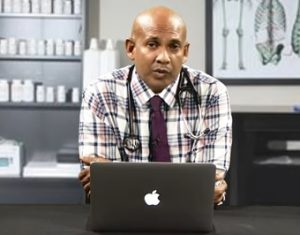 Even as Opposition Leader Joseph Harmon continues to insist that the Health Ministry suspend use vaccination with 200,000 doses of Sputnik V vaccine until he gets satisfactory answers, one of Guyana’s top health experts says more than 50 percent of those who died from COVID-19 are Afro-Guyanese.

Head of Medical Services and Cardiology at the Georgetown Public Hospital, Dr. Mahendra Carpen was specifically referring to those who succumbed to the disease at the Liliendaal Infectious Disease Hospital at Liliendaal, Greater Georgetown,

“60% of the deaths at Liliendaal since April is from our Afro-Guyanese family. Contrast with being only 30% of the general population and it raises serious concerns,” he told Demerara Waves Online News/ News-Talk Radio Guyana 103.1 FM.

He expressed sadness at this occurrence, saying “these are our people, our greatest natural resource.”

Mr. Harmon, whose People’s National Congress Reform-dominated A Partnership for National Unity+Alliance For Change (APNU+AFC) draws the bulk of its support from Afro-Guyanese, has been accused by government of causing vaccine hesitancy by his call.  With the Russian Development Investment Fund issuing a letter to the Health Minister Dr. Frank Anthony confirming the authenticity of the jabs sold to Guyana, Mr. Harmon has been called upon to withdraw his stance and fully endorse the coronavirus vaccination programme.

He noted that another rising fatality and hospitalization area is Region 10 (Upper Demerara-Upper Berbice) which is also among the lowest in vaccine uptake. “I don’t believe that’s a coincidence,” he said.

So far 454 persons have died from the viral disease dating back to last year March when the first death was confirmed.  Currently, there are 1,588 active cases, with 20 of the 115 hospitalised persons receiving intensive care and 1,473 ordered to isolate themselves at home. The Health Ministry recorded 125 new cases within the past 24 hours.

Mr. Harmon is questioning whether the letter from Russia Development Investment Fund that sought to authenticate a batch of 200,000 doses of Sputnik V vaccine is genuine. “The letter lists Mr. Christyakov as the General Director of the Russian Direct Investment Fund. However, our research has revealed so far, that the Russian Direct Investment Fund does not have such a position, and Mr. Christyakov’s name is not among the senior team members listed. The letter raises more questions than answers and is being investigated by us and our international associates,” he said,

He says until the Health Minister provides him with the information that he has asked for, the opposition will continue to insist that the Ministry of Health suspend the use of that batch of Sputnik V to inoculate Guyanese.

The Opposition Leader also says he is awaiting an answer directly from the Russian Ministry of Health’s Gamaleya National Centre of Epidemiology and Microbiology  which manufactures the Sputnik V. On June 22, Mr. Harmon wrote the vaccine manufacturer asking whether it could have supplied Guyana directly or through the Russian Development Fund, that Sheikh Ahmed Dalmook Al Maktoum is a duly authorized distributor of the Sputnik V Vaccine and that he has been supplied with Sputnik  V vaccines by the Gamaleya National Centre of Epidemiology and Microbiology.

If the Sheikh has been supplied the jabs, Mr. Harmon wants the manufacturer to state the quantity supplied, delivery dates, ports to which they were delivered, dates they were manufactured and will expire and the batch numbers of the vaccines that have been supplied.

The Health Ministry has said that while the World Health Organisation has not yet approved the Sputnik V vaccine, Guyana issued Emergency Use Authorisation based on its assessment of similar authorisations granted by more than 70 other countries.

The Health Ministry has also said there is no evidence showing that fully vaccinated persons have died from  COVID-19.