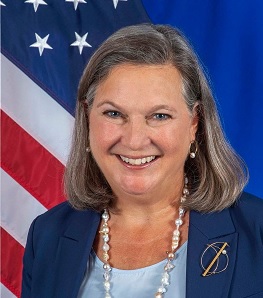 US Under Secretary of State Victoria Nuland

The United States (US) has thanked Guyana for voting in favour of a resolution at the Organisation of American States (OAS), calling for free and fair elections in Nicaragua and an end to the locking up and harassment of political opponents.

The American Embassy in Georgetown today confirmed that US Under Secretary of State Victoria Nuland communicated her government’s gratitude to Guyana’s Foreign Minister, Hugh Todd yesterday in a telephone conversation.

“The Under Secretary thanked the Minister for Guyana’s recent vote in the OAS on Nicaragua,” the embassy here said in a brief statement on the telephone meeting between Ms. Nuland and Guyana’s Foreign Affairs Minister, Hugh Todd.

The US-sponsored resolution, which was passed one week ago by the OAS Permanent Council, also calls on Nicaragua to welcome OAS and other international election observers.

The OAS resolution expresses grave concern that the Nicaragua government has not implemented electoral reforms in keeping with international standards to ensure this November’s elections are free and fair.

The BBC reports that so far five presidential hopefuls have been arrested in the past three weeks. The wave of detentions comes five months before elections in which President Daniel Ortega is expected to run for a fourth consecutive term. As well as the potential presidential candidates, the BBC also reports that police have also detained a dozen senior opposition figures. They include former comrades-in-arms of Mr. Ortega from his days as a Sandinista rebel, who later turned into critics of the president.

Ms. Nuland also, according to the American embassy, thanked the administration of President Irfaan Ali for its “commitment to transparency and governance, economic prosperity for all citizens, and strengthening regional security.” “The Under Secretary underscored the United States’ continuing support to Guyana,” the American embassy said.

Guyana’s Foreign Ministry, in an official statement between Mr. Todd and Ms. Nuland, provide no details about their discussions but instead merely stated that, “During the teleconference, Minister Todd and Ambassador Nuland discussed several areas of mutual interest between Guyana and the United States, including matters pertaining to democracy, governance, regional security in the hemisphere and enhanced business relations.”