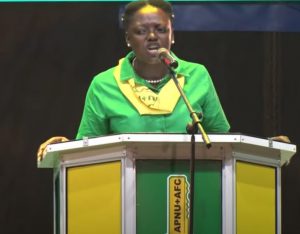 Long-serving member of the People’s National Congress Reform (PNCR), Thandi Mc Allister has resigned from the party that she served for 25 years, citing problems with its leadership.

Ms. Mc Allister, a former Chairman of the PNCR’s Guyana Youth and Student Movement, also strongly suggested that youths are being sidelined.

“After very careful and agonizing consideration, I concluded that the present direction of the leadership is ill-suited to the fulfillment of the aspirations of young people in Guyana, the enhancement of the party’s supporters, and the advancement of the nation,” she said in a statement issued late Monday.

She did not give reasons in her resignation letter dated June 15, 2021 to PNCR General Secretary Amna Ally, but also indicated in the subsequent statement that that political party has not been living up to the expectations of its supporters and Guyanese as a whole.  “In this connection, I can no longer accompany a process that, in my view, has
departed from serving the interests of the many who reposed faith in the PNC/R to champion their causes, and to offer constructive pathways for the development of our beloved Guyana,” she said.

She told PNCR General Secretary Amna Ally in a letter dated June 15, 2021.Effective immediately, my membership of the People’s National Congress Reform (PNCR) is withdrawn. Consequently, and also with immediate effect, I resign from the Central Executive Committee of the PNCR and from the Office of Regional Chairman0 Region #3.

The letter was also copied to PNCR Chairman, Volda Lawrence, among others.

Her immediate family has had a decades-long history in the PNCR, with her uncle James Mc Allister having served on that party’s executive and as a parliamentarian.

Ms. Mc Allister is an Attorney-at-Law, specialising in maritime law, and she is the Legal Counsel at the Maritime Administration (MARAD).

Her resignation comes at a time when there is internal uproar in the Executive Committee of that party over concerns that the party- the largest party in the umbrella A Partnership for National Unity (APNU)- was not consulted about bringing in the unknown Guyana Nation Builders Movement and the Equal Rights and Justice Party.

Their leaders are Tabitha Sarabo-Halley and Jaipaul Sharma who had been part of the Working People’s Alliance (WPA) and the Justice For All Party (JFAP) that have both exited APNU after they had fallen out with the way the PNCR had treated them.

Party leader David Granger has said that APNU was now back up to full strength , but has said that  Mrs. Sarabo-Halley and Mr. Sharma now have to go out and attract supporters.