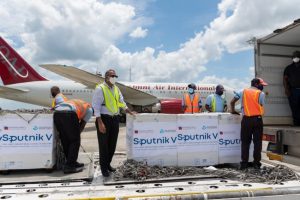 Guyana’s Opposition Leader, Joseph Harmon  has written to the Russian manufacturer of the Sputnik V vaccine, in an effort to authenticate the supplies and the transaction of more than GYD$1 billion worth of doses.

After failing to obtain a formal response to his questions from Health Minister Dr. Frank Anthony, Mr. Harmon said on Monday that he has Gamaleya National Centre of Epidemiology and Microbiology of the Ministry of Health of the Russian Federation asking  a number of questions.

Mr. Harmon alleged that Guyana has overpaid for the vaccines by as much as GYD$600 million.

The Health Ministry has already rejected Opposition Leader Joseph Harmon’s call for the suspension of the Sputnik V vaccine use from the batch of 200,000 jabs that had been purchased until it could be proven that those jabs are safe and that the transaction was above aboard. “This matter is a most serious one which directly relates to the lives and health and wellbeing of the Guyanese people who deserve transparency and credible information and not dismissive, arrogant and flippant treatment. The PPP must provide clear answers and not believe they can casually dismiss the genuine concerns of our people,” he said.

Top government officials have defended the use of the Sputnik V jabs, saying that they are being used by more than 70 countries globally and have since been reciprocally approved by the Ministry of Health’s Food and Drug Department, the local regulator, the batch numbers are written on vaccination cards that are being issued to recipients, and the batch numbers and other information are verified by the Maternal and Child Health Department of the Health Ministry.

The Health Ministry has also sought to assure Guyanese that the Sputnik V jabs have been shipped from Russia to the United Arab Emirates, to Florida and then to Guyana at the recommended temperature.