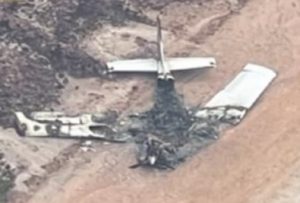 The burnt plane on a trail at Kwakwani. (CANU picture)

A burnt illegal plane was Tuesday found on a trail in the Bisaruni area, Kwakwani, and the Customs Anti-Narcotics Unit (CANU) believes that the aircraft was involved in illegal activities.

This is the third plane that has been found in the Guyana- Suriname area in recent times.

CANU said a joint services team was deployed to the area after persons in the area reported Monday midday that the burnt-out plane was spotted there.

“No illicit cargo was discovered. An investigation has been launched to locate the pilot and determine the circumstances of this discovery,” CANU said.

Investigators saw only saw part of the Brazilian registration marking, PR, on the plane. However, criminals have in the past used wrong markings on planes that usually fetch cocaine.

Recently, there have been several seizures of cocaine between Guyana and Suriname as a result of closer collaboration and cooperation.

Back in April, CANU and Surinamese law enforcement agencies had collaborated to successfully intercept 900 kilogrammes of cocaine in Suriname. One month later, a Brazilian-registered Beechcraft plane landed at Orealla, Upper Corentyne laden with 453 kilogrammes of cocaine. Two Brazilians have since been charged with illegal entry and narco-trafficking.

On Monday, Surinamese officials seized 400 kilogrammes of cocaine in the Kaaimangrasie. They also said they found a burnt-out plane a short distance away.