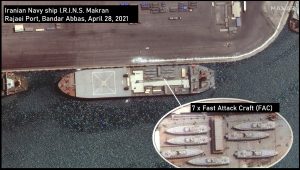 As Guyana prepares to host a Caribbean military exercise, Tradewinds, the United States (US) is urging Venezuela and Cuba to turn away two Iranian warships.

An American publication, Politico, reports that the warships are believed to be carrying arms intended for transfer to Caracas.

The US has vowed that it will take appropriate measures to deter what it sees as a threat to America’s partners in the Western Hemisphere.

TRADEWINDS is a multinational Caribbean security exercise sponsored by US Southern Command.

The GDF says military representatives from the United States and 17 partner nations will be arriving in Guyana for the exercise.

It will be held in various locations in Guyana and will provide opportunities to conduct joint, combined, and interagency partner nation capacity building focused on increasing regional cooperation in complex multinational security operations, as well as in humanitarian assistance and disaster response operations.

Politico says the US has issued the warnings to Cuba and Venezuela as the vessels have traveled a significant distance across the Atlantic Ocean.

A senior Biden administration official said the ships are thought to be carrying weapons to fulfill a deal that Iran and Venezuela made a year ago, noting that it was during the administration of former President Donald Trump.

The official did not specify the types of weapons involved, but last summer there were reports that Venezuela was considering purchasing missiles from Iran, including long-range ones, and aides to Trump repeatedly warned Venezuelan leader Nicolás Maduro against such a move.

The intelligence community, meanwhile, has evidence that one of the ships, the Makran, is carrying fast-attack boats, likely intended for sale to Venezuela, according to a defense official and another person familiar with the intelligence.

Satellite imagery of the Makran from early May provided by Maxar Technologies showed seven such vessels placed on its deck, but it had been unclear whether those boats were still aboard when the ship began its journey.

The White House is pressuring Caracas and Havana over diplomatic channels not to allow the vessels to dock in their countries, said two defense officials and a congressional official, all of whom spoke on condition of anonymity to discuss sensitive negotiations. Biden officials are also proactively reaching out to other governments in the region to ensure they will turn away the ships, the congressional official said.

Meanwhile, Caracas is trying to leverage the situation to gain relief from U.S. sanctions imposed by the Trump administration, according to two additional people familiar with the situation. U.S. intermediaries have communicated to Venezuelan officials that letting the ships dock there would make it less likely that the U.S. would provide the country with sanctions relief. However, Tehran is pushing forward with the journey in the hope of pressuring Caracas to allow the vessels to dock, according to a defense official.

It was not immediately clear if the Biden administration also considered the weapons a threat to the U.S. itself. But if Venezuela agrees to allow the ships to dock and any weapons deal to go through, it would be a show of defiance toward the U.S. by two adversarial countries that have increased their cooperation as both face U.S. sanctions.

The mere completion of a journey across the Atlantic would be a significant step for Iran’s navy, demonstrating the ships’ capabilities and potentially increasing Tehran’s access to the Western Hemisphere.

The senior Biden official repeatedly pointed to events in the Trump era as a source for today’s troubles. Trump withdrew U.S. recognition of Maduro as Venezuela’s president, arguing he basically stole an election, then heaped sanctions on Caracas. Trump also withdrew the United States from the Iran nuclear deal and reimposed economic sanctions on Tehran.

“We all hope diplomacy works,” he added. “If it does not, this administration should get ready to act — not ready to blame more and more people for their inaction.”

Representatives for the State Department and Pentagon did not immediately respond to requests for comment.

U.S. officials have been monitoring the ships’ progress over the past two weeks from the Persian Gulf, down the east coast of Africa, around the Cape of Good Hope, and now heading northwest across the Atlantic. The Makran, a former oil tanker converted to a forward staging base, is accompanied by the Sahand, Iran’s newest frigate.

As of Wednesday morning, the ships had completed more than half the journey from Iran to Venezuela, and were steaming slowly northwest more than 1,000 miles from Cape Town, South Africa, according to the second defense official, who was briefed on their position. This is the first time the Iranian navy has rounded the cape or gotten this far across the Atlantic.

Lawmakers receiving regular briefings on the matter have been publicly pressuring the Biden administration to work to deter the ships.

Advertisement
“This does not look like an oil or fuel cargo delivery,” Senate Intelligence Committee Vice Chair Marco Rubio (R-Fla.) wrote on Twitter. “This has all the markings of delivery on [sic] an arms sale (such as fast attack boats) to Venezuela coupled with the opportunity to project a message of strength to the Biden administration.”

Some lawmakers, though, are skeptical that the back-channeling will work.

Farzin Nadimi of The Washington Institute for Near East Policy, who focuses on Iran’s naval strategy and defense industries, said his greatest concern regarding the possible delivery of fast attack boats to Venezuela would involve training.

“If Iran helps Venezuela develop tactics similar to those practiced by the [Islamic Revolutionary Guard Corps] in the Persian Gulf region, that could have in my view serious repercussions in the future,” he said.

Kirsten Fontenrose, an Atlantic Council fellow and former National Security Council official during the Trump administration who focused on the Middle East, said the expiration of the UN arms embargo on Iran means this move could be followed by more exports of military equipment.

“The threat is the precedent it sets, because the UN arms embargo is no longer on Iran and they’re free to import and export,” she said. “This could be the first of many transfers we see. It allows Iran to proliferate their model of what I call zero to hero, where they arm failing governments or proxy groups and make them larger than they’re capable of being on their own, and they create these affiliates around the world that are able to threaten American interests.”

Fontenrose added that America’s transatlantic allies are unlikely to become particularly involved in U.S. efforts to manage the growing challenge.

“We’ll have to deal with this on our own,” she said.