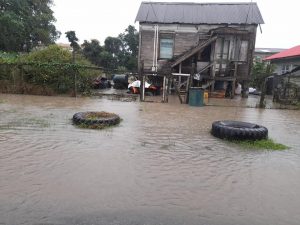 Businesses and homes in the the south-western Guyanese town of Bartica in Region Seven (Cuyuni-Mazaruni) were Wednesday under several inches of  flood waters, officials said.

Mayor Gifford Marshall said the situation was forecast to worsen by extremely high tides. “As a consequence of the intense rainfall, we have noticed flooding in all of the constituencies,” he said.

Mr. Marshall said the pumps and a koker are functioning. The Mayor said he has since contacted Minister of Public Works Juan Edghill who has promised support to bring relief to the residents.  “We are working to see how best we can reduce the impact and bring as much relief as possible under the difficult circumstances,” he said.

The Mayor of Bartica said at about 5 PM or 6 PM Wednesday the town is expected to experience the highest spring tide. Already, the Public Works Ministry has warned of more than 10-foot high tides on Wednesday and Thursday. “We have to try and get most of this water out,” he said. 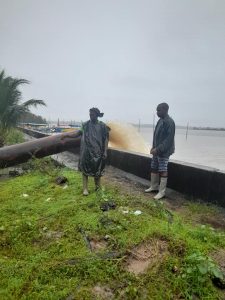 Mayor Gifford Marshall inspecting one of the drainage pumps.

As of about 4 PM, the Mayor said the water has receded from most of the constituencies but his warning remained in effect because of the impending high tide. “Flood waters in a number of constituencies would have receded.However, in light of the anticipated spring tides this evening we ask that you prepare and take all necessary measures to secure your property,” he said.

Bartica, the administrative and commercial capital of Region Seven, has a population of at least 10,000 persons.