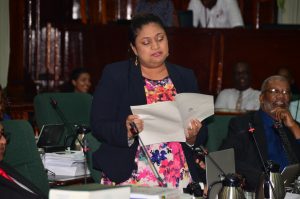 Minister of Education Priya Manickchand on Friday announced that all schools would be reopened for face-to-face classes from September because vaccines are now available to prevent people from getting very sick or dying from the coronavirus, COVID-19.

“If persons are responsible and getting vaccinated and utilising the only scientific and medically proven way of bending the curve of the CIOVID-19 disease that we are going to be able to resume a state of relative normalcy. We expect, therefore, to be able to reopen schools in September of 2021 to every grade level and we will work very aahrd to ensure that happens,” she said.

Ms. Manickchand said that,  with thousands of persons being tested and vaccines are now available, Guyanese were now expected to do the responsible thing and get vaccinated although vaccination is not mandatory.

She said schools would remain closed for the remainder of May, June and July except for Forms Four, Five and Six.

The decision by government to reopen schools after having been closed for more than one year was also reinforced by Vice President Bharrat Jagdeo at a news conference later Friday. Mr. Jagdeo also remarked that, “there was no evidence that by saying shifting curfew hours you are going to get less infections.”

The Minister said when the decision had been taken to shutter schools, “at that point we had no cure, we had no way of preventing spread, community and otherwise except that we try as hard as possible not to engage socially.” “We have also moved past the stage where vaccines were not so easily accessible,” she added.

The decision comes at a time when on average there are more than 100 new  cases every day and almost 2,000 active daily cases including many deaths every week.