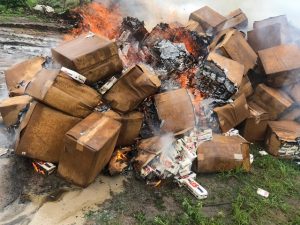 The Guyana National Bureau of Standards (GNBS) has burned 290,000 packets of cigarettes in Lethem because they were poorly labelled, that agency said Tuesday.

GNBS explained that the cigarettes, which were branded US Mild 1 and imported by a city business, were burnt at the Lethem dumpsite last Thursday, May 13, 2021 in the presence of the GNBS Inspector stationed in the Region.

“During routine surveillance inspections, the GNBS detected the sale of the cigarettes in the Lethem area and the product was subsequently examine for compliance with the Tobacco Regulations of 2018. The examination found the product to be not in compliance with labelling and marking requirements,” the GNBS said.

The Standards Bureau said as a result, the cigarettes were seized and prohibited from sale in Guyana. 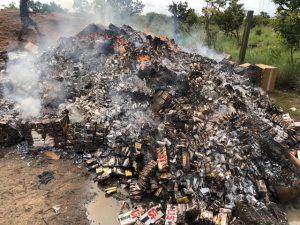 After a prolong period of storage, a decision was taken by the distributor in conjunction with the GNBS to destroy the item, the agency said.

In light of this seizure and destruction, the GNBS strongly urges importers and dealers of  cigarettes to become familiar with the Tobacco Regulations to ensure imported cigarettes are fully in compliance at the time of  importation.

Meanwhile, Inspectors of the GNBS say they will remain vigilant to ensure there is not a prevalence of noncomplying cigarettes on sale in the city and other outlying areas.

The GNBS monitors the labelling and quality of products to ensure consumer protection.

2021-05-18
Denis Chabrol
Previous: Carpenter shot at Zeelugt during a game of pools
Next: Human Services Ministry in drive to expand foster care countrywide