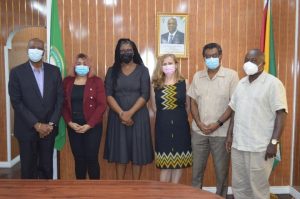 But pro-People’s Progressive Party (PPP) Elections Commissioner, Sase Gunraj told News-Talk Radio Guyana/ Demerara Waves Online News that GECOM does not need approval from the political parties or the National Assembly because that elections management body operates based on laws approved by the legislature.

Mr. Alexander said he and his colleagues refused to entertain a project briefing by the IRI team on Thursday because GECOM was not properly informed by the Guyana government about the project and whether there was any political consensus. The opposition GECOM Commissioners recalled that before the 2015 general elections, the then People’s Progressive Party (PPP) had stridently objected to an IRI project unless the government had consented.

With President Irfaan Ali refusing to meet with Opposition Leader Joseph Harmon unless he recognises the government as legitimate, Mr. Alexander said the only acceptable option at this time would be for the bipartisan CRC to discuss the 18-month project and report to  the 65-seat House for approval. “Preferably, they should meet but if they can’t, then we can go via their reps in those committees and in Parliament,” he said. He said the parliamentary mechanism would allow for a full ventilation of the project for the benefit of the Guyanese public instead of “being in a room making a decision.”

The government enjoys a simple majority in the CRC and the National Assembly. “One would have to live with a determination of that committee and the Parliament,” said Mr. Alexander.

But the PPP’s Gunraj stressed that it is only the National Assembly could reform the electoral process “and as a consequence we, as a stakeholder, can only but listen what they intend to do.” Acknowledging that IRI could obtain views about the need for reform of the electoral laws, he said there was no need for political agreement on the role of that entity. “To say that IRI cannot operate without the consensus of the major political parties or the Parliamentary parties, I think would be disingenuous at best and it is quite unfortunate that we were prevented from getting the benefit of the information because of the position taken by the opposition commissioners,” said Mr. Gunraj, a practising Attorney-at-Law.

Though the opposition A Partnership for National Unity+Alliance For Change (APNU+AFC) had released its letter to IRI Resident Programme Director, Dorota Ryzy seeking more information, the coalition on Tuesday merely released a picture and caption showing that the meeting was held but no details about the outcome.

Mr. Alexander said if the project gets off the ground, the opposition would be pressing hard for fresh house-to-house registration to be used as the only database from which the voters list should be extracted. “Our first and major concern is dealing with the register of registrants. We are of the view that we are in a conundrum because of the legal ruling of the Court and the legislature has to find some mechanism to allow GECOM to be able to go to ‘ground  zero’ and create a new register of registrants periodically,” he said.

The High Court has already ruled that the National Database of Register of Registrants cannot be scrapped as Guyanese here and overseas have a constitutional right to on the voters’ list based on their last address.

The IRI project team has said that talks would be held with Canada and India to ensure there is no duplication of assistance to overhaul Guyana’s electoral machinery.