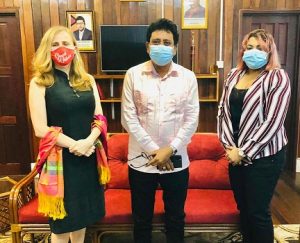 The International Republican Institute (IRI) has told the Guyana government that it will be coordinating with India and Canada in reforming Guyana’s election laws under a United States government-funded project.

“The IRI promises to liaise with the Canadian High Commission as well as the Indian High Commission, both of whom have already pledged assistance to Guyana in this endeavor and will coordinate with those offices to avoid duplication and to ensure the best use of the resources are available,” the Attorney General’s Chambers said.

The US embassy here has already said the US-funded 18-month project  aims to strengthen the capacity of the Guyana Elections Commission (GECOM), the Attorney General’s Chambers and Civil Society

The statement was issued after Attorney General and Minister of Legal Affairs, Anil Nandlall was paid a visit by IRI Resident Programme Director , Dorota Ryzy and Local Programme Coordinator, Sara Bharrat at his Chambers on May 4.

The main issue that was reportedly discussed was electoral and constitutional reform which the Attorney General spearheads for the Government of Guyana.

The IRI expressed its commitment to work with the Government of Guyana and the Guyana Elections Commission
(GECOM), in making these reforms a reality.

The Chambers said Ms. Ryzy reiterated that this support is coming from the Government of the United
States of America, represented by the US Embassy in Georgetown and IRI would be coordinating and implementing the programme.

Assistance will come mainly in the form of expertise who will be attached to the Constitutional Reform process at the level of the Parliament, at the level of the Attorney General Chambers to aid in the electoral reforms as well as at the Guyana Elections Commission.

The Attorney General’s Chambers said he expressed deep gratitude for the assistance offered and stressed the importance of strengthening Guyana’s constitutional framework, electoral laws and indeed the entire electoral machinery, in order to protect democracy in Guyana, from being undermined and penetrated by fraud, in particular of the type and magnitude which we witnessed post 2 nd March, 2020, regional and general elections.

“I feel compelled to emphasize that these matters are among the government’s highest priority. As they are vital to good governance, public order and national development. Therefore, time is of the essence. These reforms are intricately tied to Guyana’s electoral cycle and as a result, the assistance offered must manifest itself swiftly” the
Attorney General said.

The Attorney General and the IRI representatives agreed to meet at periodic intervals.