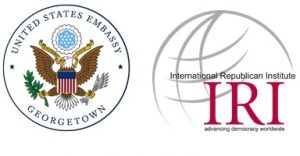 The United States (US) is supporting an 18-month project to help overhaul Guyana’s electoral processes with the involvement of key stakeholders including civil society.

The American Embassy says the project will be implemented by the International Republican Institute and aims to strengthen the capacity of the Guyana Elections Commission (GECOM), the Attorney General’s Chambers and Civil Society Organisations.

The US Embassy and IRI say that the stakeholders would be expected to set  themselves a deadline by which the electoral system would  revamped.

” Through this project, GECOM, the Attorney General’s Chambers, and Guyanese CSOs will collaboratively consolidate and improve local electoral and constitutional law knowledge, establish an internal timeline to address electoral reform, improve collaboration for joint advocacy actions, and prioritize electoral and constitutional law issues while promoting reform through citizen engagement,”  the US and IRI said.

The State Department and IRI say they hope to encourage civil society organizations to advocate for electoral reform in accordance with regional and international standards.

The State Department says “the project is part of ongoing ​US government support to strengthen the capacity of Guyana’s governance for the benefit of all Guyanese. ”

Commenting on the electoral reform process Tuesday night, Attorney General and Minister of Legal Affairs said, “GECOM would be cleaned up before the next elections,” he said on a Facebook programme.

The US’ assistance comes against the background of a five-month long wait for a declaration results of the March 2, 2020 general and regional elections. A number of international observer missions and the judiciary had noted that Guyana’s electoral laws are fragmented and not friendly for easy implementation.

International and Caribbean Community (CARICOM) Observer Missions had expressed concern about different results in particular for Region Four that had sought to hand the then governing A Partnership for National Unity+Alliance For Change (APNU+AFC) another term in office.

A recount of the votes cast had, however, put the results closer to the Statements of Poll in the possession of the other political parties. Figures from the recount were used to declare the final results as the People’s Progressive Party the winner.

However, APNU+AFC continues to accuse the People’s Progressive Party (PPP) of electoral fraud through voter impersonation of dead persons and electors who were overseas on polling day as well as the inability to verify votes in a number of ballot boxes due to missing documents.

The High Court recently dismissed an APNU+AFC election petition that had sought to challenge the legality and constitutionality of GECOM’s decision to issue a a special order to recount the votes. The coalition said it would appeal that decision.

The Statements of Poll and Statements of Recount remain in the custody of the High Court Registrar, pending an ruling by any other court or the hearing of an appeal.