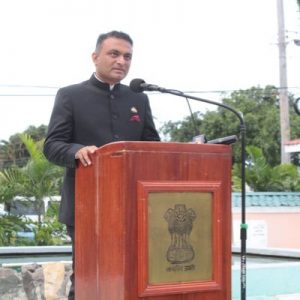 India has confirmed that it is interested in buying Guyana’s crude oil being produced offshore by the American supermajor ExxonMobil, India’s High Commissioner to Guyana Dr. K.J Srinivasa. said Thursday.

Delivering remarks at a virtual symposium on the topic “Perspectives on Guyana-India Relations from 1838 to 2021”, he said the two countries were collaborating in the area of oil and gas, He said India was interested in buying Guyana’s crude oil. “We hope to further strengthen this by working on a long-term contract between the Indian State-run public sector unit- Indian Oil Corporation- and the government of Guyana for procurement of crude oil from Guyana to India,” he said.

Although trade between India and Guyana remains low, Dr. Srinivasa was optimistic that the figures would improve shortly. “The current trade turnover remains low but the trend is very positive and is expected to zoom upwards soon with the upcoming potential deals in the oil sector,” he said.

The Indian envoy also promised training and capacity building for the oil and gas sector. He singled out he “gas-to-energy sector” at a time when Guyana is planning to construct a US$900 million electricity plant at Wales, West Bank Demerara  and lay a pipeline from the Liza 2 well.

Guyana hopes to begin electricity generation from the gas-powered plant by 2024 to deliver electricity to residential and commercial consumers at half the current price based on fossil fuels.

Indian companies, the Indian envoy said, have said they were interested in Guyana’s rice and sugar industries, biofuels, energy, pharmaceuticals and minerals.