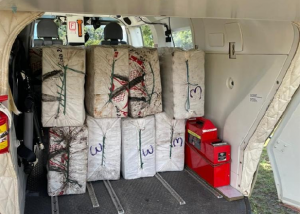 The intercepted drugs were transported from Tafelberg to Paramaribo. It concerns 902 kg of cocaine that has been seized. (Photo: CDS)

Collaboration between Surinamese police and Guyana’s Customs Anti-Narcotics Unit (CANU) has led to the seizure of more than 900 kilogrammes of cocaine.

Head of CANU, James Singh said although the plane was not seized, the operation inflicted a “major blow” on the drugs trade. “More importantly is shows the result of strong inter agency cooperation and full support of both governments to tackle the narco trade,” told News-Talk Radio Guyana 103.1 FM/ Demerara Waves Online News.

CANU said cooperation and intelligence sharing will continue to be developed between Guyana and Suriname.

The drugs bust was made at Tafelberg also known as Table Mountain in Suriname’s interior.

The cocaine was seized after authorities received information that an illegal plane landed there on an illegal airstrip.

A Cuban has been arrested. Suriname media report that another foreigner is believed to be hiding out in the jungle, Starnieuws reports.

CANU said that level of cooperation is part of the  Guyana government’s multi-faceted approach to suppress and ultimately eliminate the scourge of drug trafficking in Guyana. “The strategy will continue to be enhanced to deter traffickers from using Guyana territory to further their illicit activity,” the agency said.