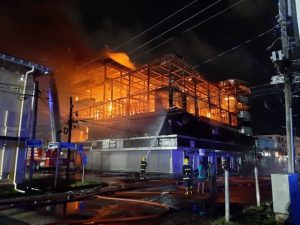 The remains of Sharon’s Mall on Charlotte and King Streets, Georgetown.

What started off as a very small quantity of smoke oozing from the second flat of Sharon’s Mall on King and Charlotte Streets, Georgetown, ended up being a catastrophic fire that engulfed the entire steel-framed building.

Many businesses- including stores, eateries and lawyers’ offices- were all destroyed.

Firefighters stood virtually helpless as the water from their hoses was no match for the lashing tongues of flames that were fanned by a steady north-east wind when the glass front building exploded after hours of internal combustion.

Firefighters responded to a call shortly after 5 PM and quickly responded with several tenders. However, it appears as though firemen could not easily locate the source of the fire that was later found to have been of electrical origin. One of the tenants was among the first group to exit the building. “I was in my office with a friend of mine when the staff from the mall came up and said you all get out of the building, the building on fire, get out, get out now so I just scrambled my computer, myself and Paula and everybody else and we started getting down the steps because we couldn’t use the elevator. It was smoky and we started stifling and then we saw smoke on the second floor,” Justice of the Peace, Ms. Carol Ryan Sooba told News-Talk Radio Guyana 103.1 FM/  Demerara Waves Online News.

By 6 PM, the smoke thickened and eventually emanated from various parts of the building as the fire spread internally.

Firefighters entered the building with breathing apparatuses to avoid smoke inhalation and eventual suffocation, but in the end evidently lost the battle to the spreading inferno.

Home Affairs Minister Robeson Benn, who arrived on the scene and remained there until the fire virtually burnt itself out and the remainder was brought under control, noted that firefighters underestimated the nature of the fire initially. He said the firefighters might have thought that they had the fire under control but the fire was “obviously moving along” in the space between the floors and the drop-ceilings. “If there is wire and whatever shielding it, that is burning along with any other flammable material around,” Mr. Benn told reporters. “I am not sure at the beginning they understood the nature of the fire and how it can spread,” he added. 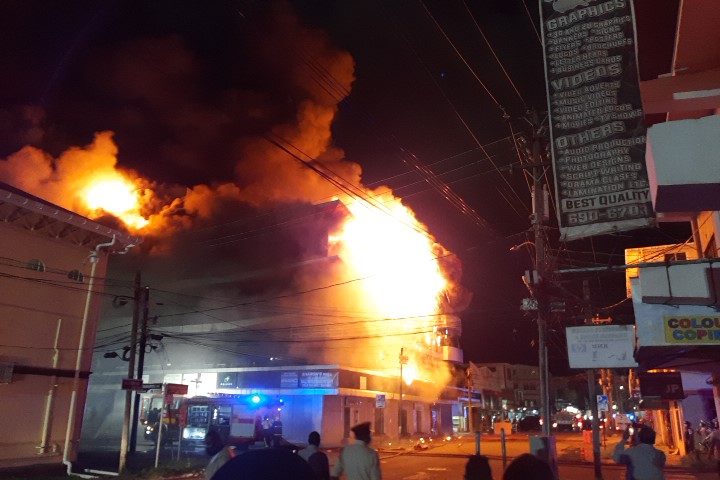 Only three businesses on the lower flat managed to save some of their stocks and other items before the inferno raged out of control. The sole owner of a stationery and copy centre, Epic Stationery and General Marketing, on the lower flat managed to save two printers but estimated that GYD$5 million in stationery and equipment was destroyed by the blaze. She suggested that police treated her unfairly compared to owners of the stores on the King Street side of the building. “The lady that called me, my sister that called me. I said ‘go to them and tell them I gave you permission to go in and take out my stuff.’ The officer told her ‘no, everything is under control’.” She couldn’t get to go and save anything but you know what is terrible, when I came and I looked: all these stores at the front here, everybody was fetching out stuff. Nobody was being barred and stopped,” said the owner of the stationery centre, Dawn Blackman.

As the glass façade shattered and the flames became uncontrollable, the colonial-era wooden High Court building seemed under threat but in the end resisted the ultra-intense heat.

Fearing that the fire would have crossed over Charlotte Street to the new concrete wing of the High Court, firefighters began soaking the roof of that structure. 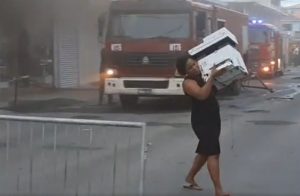 Businesswoman Dawn Blackman taking away one of her printers from her stationery and business centre that was located at Sharon’s Mall.

Police threw up barriers around the court to prevent members of the public from getting close to the fire scene.

The Guyana Power and Light did not switch off electricity supply to the area until about 7:15 PM after electrical wires on a utility pole on the corner of King and Charlotte Streets just outside Maraj Building began sparking. A GPL emergency crew quickly responded.

A stone’s throw away from Sharon’s Building, firefighters quickly put out a small fire at the Cameron and Shepherd Law Office. It was unclear whether that fire was of electrical origin or was as a result of a shower of embers from the Sharon’s Mall.

Firefighters used water from the nearby South Road and Avenue of the Republic canals.

2021-04-28
Denis Chabrol
Previous: No spending of oil revenues yet; focus will be on closing socio-economic gap- President Ali
Next: Suriname’s police seize 900 kilos of cocaine in collaboration with Guyana’s CANU