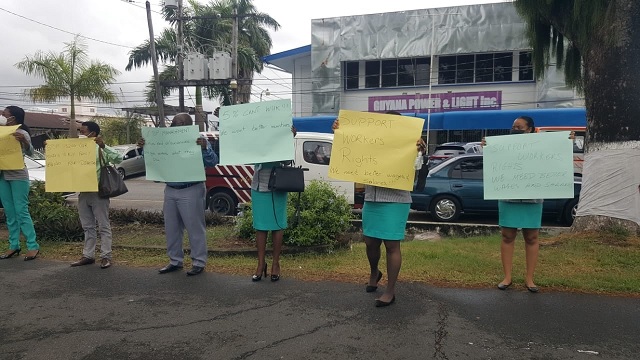 Dozens of workers staged a midday picketing demonstration outside GPL’s Main Street office to vent their frustration at the months-long delay in settling the salaries dispute for the 750 unionised supervisory to the lowest level workers. They held placards bearing several slogans such as “Support workers’ rights.  We need better wages and salaries,” “We work hard, have some respect,” “5% can’t work, we want better incentives,” and “Cut top management incentives and give workers what they ask for.”

General Secretary of the National Association of Commercial Industrial Employees (NAACIE), Dalchan Nagasar said the latest proposal by his union is for a 5 percent increase in salaries for 2020, 7 percent for 2021 and 9 percent for 2022. “They haven’t responded and when you do ask, they haven’t gotten a response as yet,” he said.

The lowest paid GPL worker earns GYD$70,000 and the highest paid is about GYD$150,000 depending on the category of worker and years of service.

He recalled that, as an essential service, a strike ultimatum had been served in January, 2021 and became effective on February 10, 2021. NAACIE’s executive would soon be meeting to discuss the next stage of industrial action

Mr. Nagasar told the media that workers were fed up that the management of the power company has not taken meaningful steps to resolve the pay dispute. “The grievance is that wages and salary negotiation is being delayed. The company is dragging its feet and the workers are getting annoyed and agitated and they are showing their disgust at the slow pace that the company is moving,” he said.

Mr. Nagasar said the grievance dates back to July 2020 when GPL sent NAACIE an offer of five percent across the board for three years. The union official  said since then three meetings have been held and by November 2020, GPL had asked to put the negotiations on hold because there was a change in government and Board of Directors.

The NAACIE official  said the two sides last met in March 2021 following a written demand following which a 68-clause proposal was tabled. He said GPL and the union have reached agreement on 66 of the clauses, with two  outstanding ones being one for an across-the-board increase and an appraisal increase.

He said the union has proposed a three-year wage and salary increase but since then  management has not asked for another round of talks.

The NAACIE General Secretary called on Prime Minister Mark Phillips, who is responsible for the electricity sector, to intervene and settle the grievance.