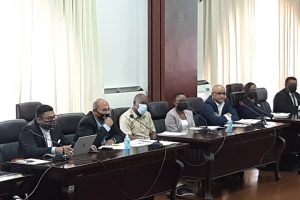 Vice President Bharrat Jagdeo on Monday insisted that the proposed US$810 million to US$900 million gas-to-shore project would be viable in years to come, despite ongoing progress in scaling up renewable energy sources and reducing dependence on fossil fuels.

“I don’t believe fossil fuel prices will fall. You still have a large number of years when fossil fuel prices will fluctuate and it may get even higher,” said Mr. Jagdeo, an economist and former Finance Minister. He reasoned that major financial institutions were not funding green energy projects and that meant that new projects would not come on stream. He queried whether renewable energy would fill the gap of fossil fuels or there would be a huge shortfall. “If there is a shortfall and they can’t fill the gap, the prices are going to go up because you don’t have increase in supply, you don’t have the development of new fields or switching,” he said.

The Vice President noted that spot changes such as conflicts can easily spike oil prices.

Mr. Jagdeo sought to assure Guyanese that the almost US$1 billion investment in the gas-to-shore project makes sense, even as  US energy secretary Jennifer Granholm urged oil companies to diversify away from fossil fuels as major  industrialised nations agreed to cut carbon emissions by as much as 52 percent by 2030 under the Paris Climate Accord.  The US, India, China and the European Union earlier this month agreed at the US-led Climate Summit to build renewable energy sources, transmission, and energy storage and leverage the carbon pollution-free energy potential of power plants retrofitted with carbon capture and existing nuclear.

At today’s oil prices, Mr. Jagdeo relied on five studies by A Partnership for National Unity+Alliance For Change (APN+AFC) government to state that Guyana would save US$150 million annually in the cost of Heavy Fuel Oils for generating electricity and Guyanese electricity bills would be reduced by 50 percent. “The price of power that people pay now will be half , cut by half. That’s our aim so this here accrues to them,” he told a media briefing held at the  Arthur Chung Conference Centre (ACCC).

The proposed gas-to-shore project, which is expected to be located at Wales, West Bank Demerara, is also expected to produce urea, ammonia and animal protein for the agricultural sector as well as cheap cooking gas for Guyanese. But Mr. Jagdeo offered no projected revenues from the total operation when it comes on stream by 2024.

Mr. Jagdeo said under the proposed deal, ExxonMobil and the Guyana government would fund the gas-to-shore project  and would extract 50 million cubic feet per day of gas to generate 250 megawatts of electricity.

The Vice President provided no data or cited no studies showing that futuristically renewable energy would be much cheaper than the gas-powered generation facility. He, however, assured that the gas-to-shore power project would insulate Guyana from huge upward fluctuations of the cost of oil, currently at about US$75 per barrel. “What this brings is long-term stability to the price, not the wide fluctuation in price so we are moving from usual market fluctuation, especially upward movement of the cost of Bunker and other fossil fuels to a project of this nature because it’s fixed,” he said.

The Guyana government estimates that the projected capital expenditure (CAPEX) for the offshore pipes and riser will be between US$570 million to US$630 million. The cost of the onshore pipeline alone is US$80 million to $100 million, while the natural gas plant is projected to cost US$120 million. Associated infrastructure such as wharf and roads to transport the equipment to the is expected to cost  about US$40 million to US$50 million.

Beyond the lifespan of the gas-to-shore project from the Liza field, Mr. Jagdeo indicated that it was too early to say what are the plans to tap into associated gas from other oil reservoirs.