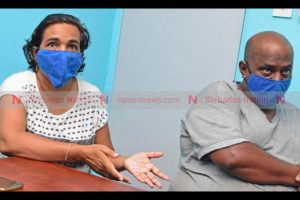 Barbados’ Director of Public Prosecution’s Office on Friday withdrew the COVID-19 charges against  two Guyanese shopkeepers but the two will still have charges to answer.

Those facing the courts are Emma Ann Abrahim and Churaman Veerandra.

Abrahim and Veerandra, whose addresses were listed as the corner of Pinfold Street and Roebuck Street, St Michael, had been charged with violating a directive requiring every person to observe such social distancing and associated protocols in the interest of public health imposed from February 3 to 17.

Authorities say that, being the owner of a non-essential service not permitted to open in this directive, namely Aaron’s Fruit and Vegetable Minimart, they failed to remain closed on February 8, 2021.

2021-04-17
Denis Chabrol
Previous: APNU+AFC will not participate in Elections Commission of Inquiry
Next: Nurse Assistant on bail for alleged ponzi scheme fraud