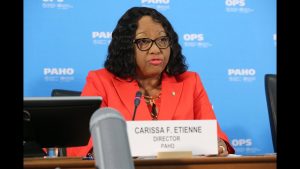 Director of the Pan American Health Organisation (PAHO), Dr. Carissa Etienne on Wednesday hinted that the surge in COVID-19 cases in Guyana is due to a new variant of the potentially deadly virus.

“After the introduction of new variants in the Guianas, cases have accelerated in French Guiana and Guyana,” she said in her weekly news conference.

Figures show that of the 262 persons who have died in Guyana so far for the year, 67 have succumbed between February 28 and April 14.  Earlier Wednesday, Health Minister Dr. Frank Anthony said COVID-19 hotspots have emerged at Diamond, Herstelling and Eccles in East Bank Demerara; Kitty, Campbellville and parts of South Ruimveldt, Georgetown as well as Lusignan and Good Hope,  East Coast Demerara.

The Health Minister on Wednesday said the rising number of  cases was becoming increasingly harder to manage.  Earlier in the day, he said 74 persons were hospitalised. “We want people to understand that this is a very serious disease because we have seen a rise in cases, especially in Region Four, and we have also seen an increase in hospitalisation and I am sure everybody has seen that we are also getting more deaths because the people who are coming into hospital, they are much sicker and, therefore, we have more difficulties in managing these complicated patients when they come at this late stage to the ICU,” said Dr. Anthony,  a medical doctor and public health specialist. 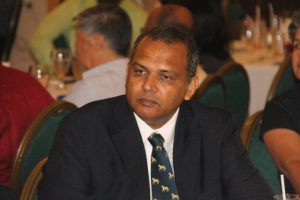 There were 97 new cases recorded on Wednesday and 1,143 persons told to isolate themselves at home to avoid spreading the virus to others.

So far,  the Health Minister said 67,000 persons have been vaccinated  to avoid persons from falling seriously sick or dying from the disease that was first detected here last year March.

Guyanese health authorities have so far said the Trinidad-headquartered Caribbean Public Health Agency (CARPHA) has not detected any variants of concern in samples that had been sent to that regional agency a few months ago.

While the Ministry of Health has not linked the spike in cases and more seriously ill younger persons to the Brazilian variants, Dr. Anthony has said that Guyana has stepped up patrols on the border with Brazil to ward off any newer strains of that virus that are easily transmissible and sickens  and kills persons easily. “We have increased the COVI-CURB patrols along the border. These are the joint services, who are normally deployed there so they have strengthened. They have been monitoring the border very actively to prevent persons who might want to go across or come across from Brazil so as much as possible that is what we are trying to do,” he said.

Up to Wednesday, Guyana’s total recorded cases was 11,374 since the outbreak in March last year. Since then, 9,980 persons have recovered from the viral disease, the Health Ministry said.

Dr. Etienne said the rise in infections across the Region of the Americas is “alarming but frankly not surprising.” “Highly transmissible variants are spreading and social distancing measures are not as strictly observed as before,” she said.

The PAHO Director  noted that more than 1.3 million persons have become infected with COVID-19 and nearly 36,000 persons died in the Americas over the past week.

Describing South America as the epicentre of the pandemic in the Americas, Dr. Etienne said the recent spike in cases in the Amazon is also seen in neighbouring States. She said Brazil, Colombia, Venezuela, Peru and parts of Bolivia are seeing a sharp increase in the viral disease.

In the Caribbean, the top Western Hemispheric health official said Cuba, Puerto Rica, Curacao, Aruba, and Puerto Rico have been reporting a rise in cases.

The PAHO Director and the  Guyana Health Minister again appealed to people to take all necessary precautions such as social distancing and the wearing of masks and do not become complacent because there are vaccines.