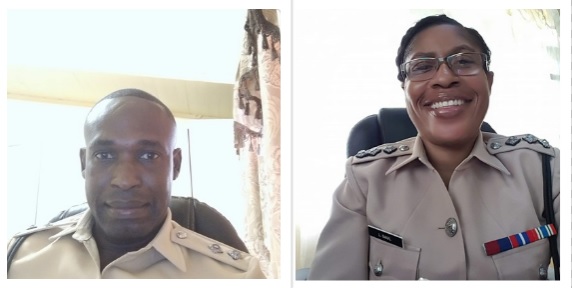 The Head of the Guyana Police Force’s Finance Department and a Mess Officer at the Brickdam Police Station have been charged with allegedly defrauding the law enforcement agency of a total of GYD$1.8 million for food.

Police said only the Head of the Finance Department, Assistant Superintendent Kurt Smith was arraigned before Chief Magistrate Ann McLennan and he was granted GYD$100,000 bail on each charge and ordered to return to court on May 14.

Woman Superintendent of Police, Lorraine Saul, who was  the officer-in-charge of the Brickdam Police Station’s Other Ranks Mess, was “out of the jurisdiction” and so the charges were not read to her.

It is alleged that between the period 1st to 15th December, 2020 Woman Superintendent of Police L. Saul inflated several accounts for meals provided by Brickdam Other Rank Mess for reimbursement at the Police Finance Department. The matter was reported to the Special Organised Crime Unit (SOCU).

The Brickdam Other Ranks Mess provides breakfast, lunch, and dinner to ranks stationed at various stations and locations within Regional Division 4 ‘A’.

Police said SOCU investigators uncovered that Ms. Saul allegedly prepared an account dated December 18, 2020 and a petty contract with the same date for meals purportedly supplied to ranks who performed duties at ‘A’ Division Riot Unit Training between December 1 and December 15, 2020 to the amount of GYD$1,350,000 although “no such training was done for this period.”

Further, police alleged that Ms. Saul also prepared another account and petty contract dated the said dates for meals purportedly supplied to ranks who performed fixed point duties at the Georgetown Prison between December 1 and December 15, 2020 for GYD$648,000. “Ms. Saul inflated the number of ranks and amount of meals on this account in the sum of $ 465,000,” police alleged.

The Guyana Police Force said investigations also revealed that ASP Smith colluded with Ms. Saul to defraud and authorize the payments when in fact no such training nor the amount of feeding took place. Further, ASP Smith, as the Finance Officer (ag) knowingly authorized the said payments from the Government funds, police alleged.

Mr. Smith was not required to plead as the charges were indictable.

The Court was informed that Woman Superintendent of Police Loraine Saul is out of the jurisdiction. The matters are adjourned to the 14th day of May, 2021 at 9:00 hrs.