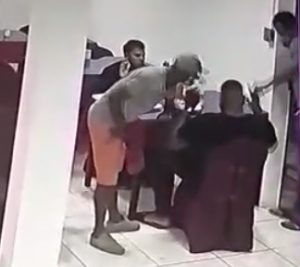 The two men being robbed.

A speedboat captain and a sales representative, who were dining together at a West Bank Demerara Chinese restaurant, were Saturday night robbed of  more than GYD$3.5 million in cash, jewellery and other valuables, police said.

Images of the men, who were masked, as well as the entire ordeal that lasted less than 10 minutes were captured by video surveillance cameras.

The robbery was committed by two unidentifiable males who were both armed with guns. The robbery took place on Saturday between 8:15 PM and 8:30 PM at Lot 15 Pouderoyen, West Bank Demerara which houses a Chinese restaurant named Hong Xiang.

” At the time, they were both having a meal when the suspects walked into the restaurant and pointed guns to the victims and at the same time, relieving them of the items mentioned and made good their escape in a white 212 motor car, registration unknown,” the Guyana Police Force said.

Police said no shots were fired, the area was searched and several persons were questioned but no one was arrested.