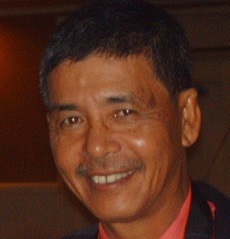 Samuel Colin Ming, who is the brother of well-known businessman, Stanley Ming, died on Friday following a road accident with an ambulance a day earlier.

“I lost my brother His injuries were quite severe, ”  Stanley said, as he confirmed the passing of his brother.

Samuel, he said, was his partner from the beginning in the family-owned Ming’s Products and Services Ltd.

Police said Samuel Ming, who was riding a motorcycle when the accident occurred at about 2:15 PM on April 1 at the junction of Thomas and JB Singh Roads, was in a stable condition. However, multiple sources said both collar bones and a number of ribs are fractured. He also sustained injuries to his chest and hip.

He is said to be conscious and recalls having been involved in the accident.

The Guyana Police Force said the Ministry of Health ambulance , PVV 7693,  and motor cycle, CE 614,  driven by Samuel Colin Ming  occurred as he was crossing the intersection of JB Singh and Thomas Road.

“Enquiries disclosed that the ambulance driver alleges by that he was proceeding north along Irving Street at about 45kmph and had on the siren while sounding his horn and as he was crossing the intersection of JB Singh and Thomas Road, the motorcycle which was proceeding west on JB Singh Road collided to the rear right side portion of the ambulance,” the Guyana Police Force said. The ambulance driver told police that he was transporting a COVID patient to Liliendaal when the smash-up occurred.

Samuel Colin Ming, police said, fell onto the roadway and received injuries about his body. He was picked up in a conscious condition by the Emergency Medical Technicians and taken to the Georgetown Public Hospital .

Police said both vehicles were damaged. A breathalyzer test was conducted on the driver of # PVV 7695 but no trace of alcohol was found on his breath.

The ambulance driver is in custody, and police have already issued a notice of prosecution.