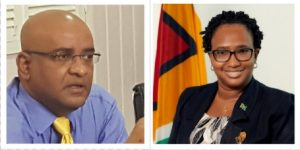 The High Court has ordered Vice President Bharrat Jagdeo to pay Former Housing Minister in the then A  Partnership for National Unity+Alliance For Change (APNU+AFC) administration, Annette Ferguson GYD$20 million for defaming her.

One of Mr. Jagdeo’s lawyers was late Tuesday afternoon writing a media response to the High Court decision.

Mr. Jagdeo, according to the judgment  seen today, is required to also pay Ferguson court costs of GYD$75,000 dollars.

Justice Sandra Kurtzious says that failure to honour the judgement will result in Mr. Jagdeo being in contempt, may be liable to imprisonment and may have his assets confiscated to honour the debt.

Justice Kurtzious made the orders of judgement after it was found that Mr. Jagdeo failed to file a defence within the required time provided for under the Civil procedure rules of the Supreme Court.

Mr. Jagdeo, who was Opposition Leader in 2020, had publicly stated  that the former housing minister had acquired significant wealth in only two years of being the housing minister.

Jagdeo further stated that the former minister used public office to acquire several plots of lands at Eccles, East Bank Demerara on which she was building a mansion.

The statements made by Jagdeo were published in the Guyana Times.

Ms. Ferguson maintained the statements were slanderous, untrue and caused irreparable damage to her character and reputation.

The former minister said in court papers that the statements and publications suggested that she acquired unexplained wealth by dishonest means.

Ferguson had called on Jagdeo and Guyana Times to provide evidence to the court to support their claims.

The former APNU/AFC Housing Minister says that the article was deliberately written and circulated by Guyana Times to tarnish her reputation and to cause persons to believe that she is a corrupt and dishonest person.

Ms. Ferguson’s lawsuit against Guyana Times is pending in Court.