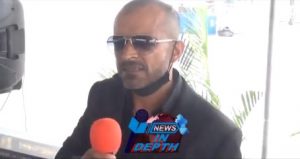 Convicted drug-lord, Shaheed ‘Roger’ Khan, who had publicly claimed to have prevented the Bharrat Jagdeo administration from being toppled, on Monday said he was the intended target of gunmen who killed his “son” Ricardo “Paper Short” and he accused police of deliberately responding slow to the incident.

“This was not an attack on Ricardo…He died in my place. Make no mistake about it. Ricardo died in my place. Every single one of those bullets was meant for me. All twenty-something of those bullets were meant for me. I’m standing here almost speaking to you as from the grave,” said Mr. Khan who was also with Ricardo at Palm Court.  Khan said the “tragedy” could have been greater because his daughter, Betty, and Fagundes’ niece were also in Palm Court.

Khan had been often accused by the People’s National Congress Reform-led opposition coalition of A Partnership for National Unity+Alliance For Change (APN+AFC) of being at the helm of a death squad that had been responsible for the deaths of hundreds of mainly Afro-Guyanese.

Jagdeo had in the past distanced himself and his People’s Progressive Party (PPP) from Khan amid claims that the latter had staved off a coup. Evidence led in a United States court had shown that then Health Minister Dr. Leslie Ramsammy had given government authorisation for the purchase of sophisticated cellular phone tapping and triangulation equipment. Khan and several of his cohorts had been arrested at Good Hope and firearms and cellular tapping and triangulation equipment had been seized.

Khan did not say who was behind the police slothfulness last week Sunday when Fagundes was riddled to death by high-powered weapons on Main Street outside Palm Court a short distance from State House and the Prime Minister’s Official Residence. “This assassination has a particular signature to it especially in the light of the police posture over the past week,” he said in a Royston Drakes video recording at Fagundes’ funeral . He noted that the car was parked short distances away from the President and Prime Minister’s residence under three State cameras and two private cameras as more than 40 high calibre rounds were found, killing Fagundes. Mr. Khan said the police posture was characterised by intimidating people at the wake and vigil.

The Guyana Police Force did not address Khan’s concern that the response was poor before and immediately after the incident, but disagreed with him that the probe was not getting the kind of desired attention similar to the Henry cousins who were hacked to death last year and their bodies found aback Cotton Tree village, West Coast Berbice. “The police are not following the evidence in this matter.  Responding to Mr. Khan’s claims that Fagundes’ shooting death has not reached Police Headquarters at Eve Leary, and that was a “particular signature” of the probe, the Guyana Police Force slammed Khan’s comments as “erroneous” and denied that the probe was adversely affected by corruption or other reasons. “From the outset, the Guyana Police Force states that the investigations into the circumstances surrounding the death of Ricardo Fagundes have not been compromised, neither has the Police Force failed the victim and his family, as alluded to by Roger Khan. This incident is being treated with every seriousness and alacrity spearheaded by investigators of the Force’s Major Crimes Unit,” the police force said. Police said Khan was aware of that as he  was questioned by two policemen and voluntarily gave a statement in the presence of his lawyer

Khan appealed to President Irfaan Ali to “remedy this situation and fix this injustice”. “Ricardo’s life is no less important than any other life in Guyana. We’re asking for the political will, we’re asking for the resources that this investigation be handled by impartial investigators,” he said. He claimed that senior police officers have told him that they have to stay far from the probe.

Mr. Khan said a police patrol that had passed by had not recognised a stolen vehicle with a fake number plate. He said it was from that car that the men emerged at 10:01 PM and mowed down Fagundes after they had seen his (Khan) Ford vehicle lights turned as he had been preparing to drive it to Palm Court entrance.

In apparent reference to police surveillance video, he cited evidence that was in the public domain that showed that 29 minutes after the killing of Fagundes, the vehicle travelled to the Soesdyke-Linden Highway without having been intercepted by police. “Twenty-eight minutes they drove from Palm Court to the most populous and busy highway in Guyana, unencumbered by a single police patrol, even though, even though at the scene police were there harassing witnesses in minutes and there is one State security vehicle that arrived there in seconds, yet no road block was erected all the way to decide,” he said.

Unlike “common practice” to erect roadblocks on the East Coast and East Bank Demerara when incidents like that occurred, Khan said none of that happened. “The State security failed Ricardo and in the past week State security investigations have failed him and his family and I’m telling you that history, history can tell us that when there is no State security lawlessness will prevail. The heart of men bleed for justice,” he said.

He warned that if the police does not solve Fagundes’ death, anger would pour out. “If the police do not investigate this crime and follow the evidence rather than follow the money or any type of corrupt motive, the hearts of men will become enraged,” he said.

Police have also rejected Khan’s claim that no statement was issued to the public through the media, but said “it would not be prudent to divulge certain aspects of the investigation.

The law enforcement agency said the Police Crime Chief has been updating media operatives as they make contact with him in relation to the matter.