Local Government Minister unmasked, close to others for Phagwah, despite official warning 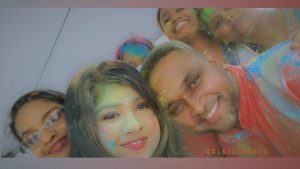 Amid repeated warnings by President Irfaan Ali that the stern action would be taken against people who refuse to social distance or wear masks especially during upcoming religious festivities, Local Government Minister Nigel Dharamlall was on Facebook unmasked and face-to-face with staff members.

When contacted by WhatsApp, Mr. Dharamlall did not respond.

However, a well-placed government official agreed that the Local Government Minister’s portrayal was unhelpful to the cause in the fight against the disease that has currently sickened more than 900 persons and killed 225.

Health Minister Dr. Frank Anthony was only days ago urging Guyanese to comply with the COVID-19 rules. “All of this can be avoided if people do the right thing. We are all in this together so if we keep violating these things and allowing people to do the wrong things, we are going to continue to see spread,” Dr. Anthony, a medical doctor, has said.

Mr. Dharamlall’s Facebook post was somewhat of a contrast to Minister of Education Priya Manickchand’s as she and her staff were all masked but still very close to each other.

Medical experts recommend social distancing to avoid being infected due to viral shedding from others. 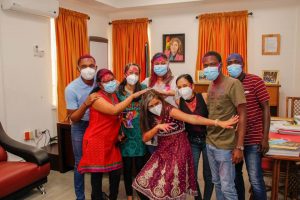 Minister of Education, Priya Manickchand and a number of her staff members.

Opposition parliamentarian, Ganesh Mahipaul on Saturday called on the National COVID-19 Task Force to take action against Mr. Dharamlall. “I am calling on the Guyana Police Force to take the necessary action. This is clearly a breach of the COVID 19 guidelines. Priya Manickchand and Hon Minister Deodat Indar please assist me in getting this picture to the Police for action. We must not condone wrongdoing! Dharamlall is supposed to lead by example. Shame! Shame! Shame!,” said Mr. Mahipaul.

The President said the next four weeks would be “very critical” for Guyanese in “ensuring that we stick to the guidelines while we push ahead with the vaccinations so the Task Force will be working simultaneously with the vaccination programme to have strong enforcement.”

Dr. Ali has already appealed to religious leaders to be mindful of the COVID-19 restrictions for Phagwah, Easter and Ramadan.