Police, soldiers arrive in Baramita to beef up security 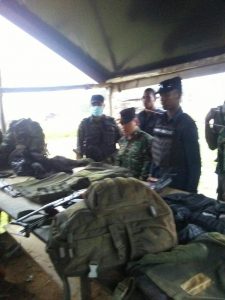 Police and soldiers are beefing up security in Baramita, North West District in the wake of a number of crimes there.

During a weekend visit by senior officers of the army and police, they have decided to establish a temporary base at the bottom flat of the community’s multi-purpose building.

However, the Guyana Police Force says the intention is to establish a base at Baramita.

However, top regional police and regional council officials met with the Toshao and the Baramita Village Council and discussed a range of security concerns.

The Joint Services also want residents to provide them with information about criminal gangs as well as build better relationships between police and the community.

The establishment of a youth group was also discussed.

2021-03-15
Denis Chabrol
Previous: Watch out for cyberbullying during COVID-19; teachers, parents urged to be vigilant- Rights of the Child Commission
Next: COVID deaths jump to 208