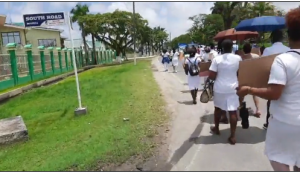 Nurses on Monday refused to stop blocking the Chief Executive Officer of the Linden Hospital Complex, Mr. Rudy Small from entering the premises unless the Health Ministry removes him from office and disciplines him for unsavory remarks about health care workers there.

The Health Ministry has already deemed the action by the nurses as an “illegal” strike and has refused to hold talks with them or the Guyana Public Service Union (GPSU) unless the industrial action is called off.

But GPSU President, Patrick Yarde on Monday denied that the nurses were on strike, saying that they were merely blocking the entrance to the Linden Hospital Complex to prevent Mr. Small from going to his office.

Pressed on whether adequate notice of industrial action was given in keeping with the laws governing essential services, he said the Linden Hospital Complex was “providing full service” and so there was more than a skeleton staff on duty. “We would give adequate notice if we have to withdraw all our members,” he added.

Mr. Yarde rejected calls by the Health Ministry for the workers to first return to work before talks are held with the union and the nurses about the CEO’s future at that health care institution. “We will not subject our members to that humiliation to go and work under that vulgar, improper person,” he said to applause by nurses present.

Mr. Yarde said he called a cellular number six times for the Health Minister Dr. Frank Anthony and there was no acknowledgement or response to a letter sent to the  ministry to discuss its “bullying decisions.”

Instead, the GPSU demanded that the Health Ministry stick to its initial decision to remove Mr. Small from the Hospital Complex. “The action that they took and rescind, they must reinstate,” he said.

Mr. Yarde said the CEO must not only be removed but must face disciplinary action, even as he called on the authorities to say whether they would tolerate their spouses being treated in that matter.

Earlier Monday, about 50 nurses journeyed to the Ministry of Health, Brickdam, Georgetown where they chanted slogans and waved placards to press their demands. They then marched passed the Office of the President on their way to the GPSU where they surrounded Yarde and other union executives at the news conference.

“Liar Rudy Must Go,” “Disrespectful Rudy Must Go”, “We Demand Respect”, “Respect Our Nurses,” “No Work No Risk Allowance,” and “Nurses Rights Are Human Rights.”

GPSU Vice President , Dawn Gardner told the news conference that the CEO would face legal action for defaming the nurses.

Mr. Small’s unequivocal apology for the comments he had made about the nurses has been rejected by the nurses and their union.

2021-03-15
Denis Chabrol
Previous: Update: GDF Corporal knocks down riders- police
Next: Watch out for cyberbullying during COVID-19; teachers, parents urged to be vigilant- Rights of the Child Commission