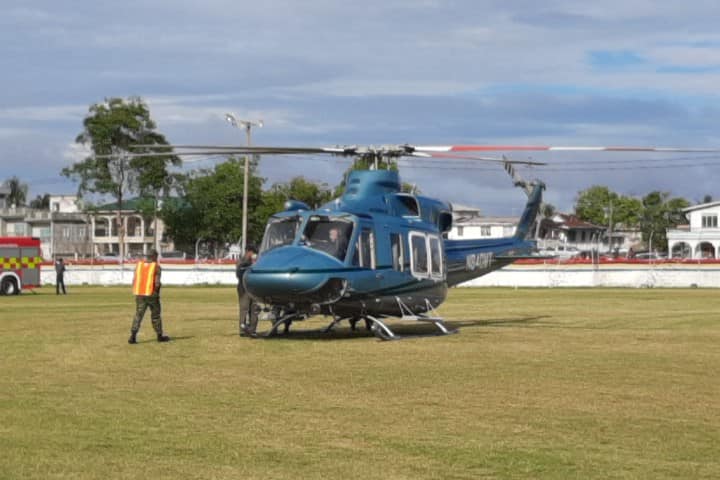 The Guyana Defence Force (GDF) on Saturday commissioned a Bell412 EPi medium lift helicopter that authorities intend to use to monitor the country’s fisheries zone, conduct search and rescue operations, and move troops in one-hop missions.

GDF Chief-of-Staff, Brigadier Godfrey Bess said the chopper has been acquired at a time when Guyana continues to face aggression from Venezuela despite efforts to resolve the border controversy peacefully. “In terms of national security, this is a significant tool to enhance the effectiveness of internal security and joint services operations,” he added.

Sources have already said that the helicopter was originally priced at US$13.5 million but Guyana paid US$9.5 million.

Mr. Bess said the helicopter would assist in conducting reconnaissance of oil fields and fishing offshore Guyana. “It will also allow us to have a substantial presence in assisting with the surveillance of security of our offshore operations in our fisheries zone and also our vast, remote land space,” he said.

The United States, which approved the sale of that helicopter to Guyana, has enlisted this country’s support to fight illegal, unreported and unregulated fishing.

Unlike the Bell 206 chopper which has to make refuel stops to reach far-flung destinations, Air Corps Lieutenant Colonel Mohinder Ramjag highlighted that the Bell412 EPi could travel long distances. “This helicopter can project troops to any part of our country on a single flight,” he said.

He said the new chopper is best suited for Guyana because it can operate in “harsh and demanding” environments such as high temperature and high elevation conditions.

Commanding Officer of the Air Corps, Lt. Col. Courtney Byrne He said after several studies, comparisons and analyses, the Bell 412Epi was found to be the most suitable and efficient helicopter for missions in Guyana’s terrain.  Records for all aircraft components of the 2018-model new helicopter , he said, were inspected. “There was due diligence at every stage of this process,” Mr. Byrne said.

As part of the deal, Bell Helicopters will provide components in the shortest possible time.

The Commander of the Air Corps said with the Bell 412 Epi, the GDF could now carry out its mandate to support search and rescue operations as well as insert and extract troops on the ground or by rappelling. Officials also described the aircraft as having a dual military-civilian function.