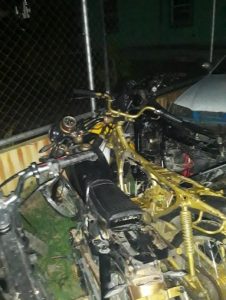 A welder-fabricator of Pouderoyen, West Bank Demerara and his father have been arrested and 13 motorcycles and frames have been seized from the location, the Guyana Police Force said Tuesday.

Region Three Divisional Commander, Senior Superintendent Errol Watts is urging persons who have lost their motorcycles to visit the Vreed-en-Hoop station to see if any belongs to them.

The motorcycles and frames were seized from the premises at Lots B and C, Coglan Dam, Pouderoyen on Monday.

Police say the 26-year old welder-fabricator cannot give a satisfactory answer about the owners of the cycles. He was told that police received a report that he had stolen property on the premises.

Investigators say they also arrested the welder-fabricator’s father, who is 55-years old, for being in possession of one .32 Taurus Revolver.

Police say the man informed police that he last renewed his firearm license in 2017.