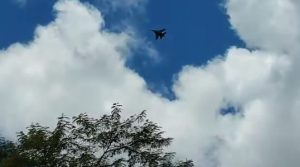 One of the Venezuelan fighter jets over Guyana’s airspace on Tuesday.

Venezuelan fighter jets overflew Guyana’s police and military installations Tuesday afternoon, but there was no other incident, officials confirmed.

The incident occurred at Eteringbang, a mining area near the border with Venezuela, at about 1 PM. “Two Venezuelan fighter jets flown over Guyana air space at Eteringbang landing and circled over the Eteringbang police station and GDF (Guyana Defence Force) base and departed,” police said.

The Ministry of Foreign Affairs, according to well-placed sources, was studying the information before issuing  a statement.

This is the latest form of territorial aggression against Venezuela, following closely on the heels of the detention and subsequent release of two Guyanese fishing vessels and crew that had been in Guyana’s waters off the Essequibo Region.

The flyover over Guyana’s airspace came just days after Venezuela’s Defence Minister Vladimir Padrino warned Guyana that it will defend at all levels” the rights it claims it has over the Essequibo Region.

The Spanish  News Agency reported said in an interview broadcast this Sunday on public television VTV that his country is convinced that the Essequibo belongs to Venezuela.

At the same time, Mr. Padrino is reiterating its willingness to resolve the conflict within the framework of the Geneva Agreement.

The Defence Minister says there will be positions, but unity always prevails in the end, in reference to the problem-plagued relationship between his government and the opposition there.

Instead, Venezuela wants to settle the border controversy in bilateral negotiations, a process that Guyana says has failed for about 50 years.