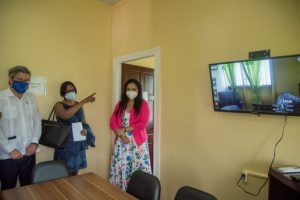 Guyana has recorded more than 300 cases of child abuse for the year on top of in excess of 3,000 reported  in 2020, Minister of Human Services and Social  Security Dr. Vindhya Persaud said.

“We have seen last year over 3,000 cases of child abuse; [it’s] very early in the year [2021] with over 300 cases,” she said at last weekend’s official opening of two one-stop Child Advocacy Centres at Springlands and Whim, in East Berbice-Corentyne.

The chilling figures about the scale of child abuse in  this former British colony also triggered fresh calls for concerted action to be taken by everyone to combat the scourge. “Something needs to give and we need to ensure that wherever we are or whoever we are, we not only speak up and against child abuse, but we develop a culture of encouraging children, young people to report it and to develop a culture in adults so that when they see it, they report it,” she said.

Going forward, Director of ChildLinK, Ms. Omattie Madray  said the centres would place more focus on the care of boys since there has been a significant increase in reported child abuse cases involving boys. “Over the past few years, there have been at least a fivefold increase of sexual violence being reported by boys,” she said.

Ms. Madray also said ChildLinK would be launching a new ‘1000 boys’ initiative to help encourage boys to report abuse, and to encourage men and boys to advocate against this scourge.

Dr. Persaud recommends that women and children be taught to call the hotline number 914 in the same way they are taught A-B-C. The Minister, who is a medical doctor by profession,  says the COVID-19 pandemic has made it hard to combat child abuse and in  particular sexual abuse because the children are now home.

She says schools  create the opportunity for abused children to relate their experiences and so alert teachers. The one-stop centres, which are being managed by ChildLinK, deals with the investigation, treatment, management of child sexual abuse cases.

During the ceremony at Springlands, Minister Persaud said the initiative is part of a collaborative effort to tackle the alarming number of child sexual abuse cases. It is also part of the Ministry’s effort to decentralise its services, she said.

To date, advocacy centres have been established in Regions Two, Four, Five, Six, Seven and Ten. Minister Persaud said the ultimate aim is to have these centres replicated in all the administrative regions.

“With the Child Advocacy Centres mushrooming across the country and offering that alleviation of a scourge that has dogged not only this country, but the entire world for a very long time, maybe we might just make the kind of impact that we want to see in the world of children,” she was quoted  as saying by government’s Department of Public Information.

This will complement the 914 domestic violence hotline which was launched in December. Minister Persaud said the Ministry would be taking steps to ensure that children are familiar with the hotline number.

Ms. Madray, said the centre allows children to tell their story once and receive counselling to deal with the trauma resulting from the abuse.  It provides statements for prosecutions and also offers support when the children and their families appear in court.

The UN Representative said CAC is part of the Spotlight Initiative, which is a global, multi-year partnership between the EU and the UN to help eliminate all forms of violence against women and girls. It contributed approximately $1 billion (€4.5 million) to Guyana’s efforts to tackle gender-based and family violence over a three-year period.