Guyana asks US for help in locating boat with decomposed bodies 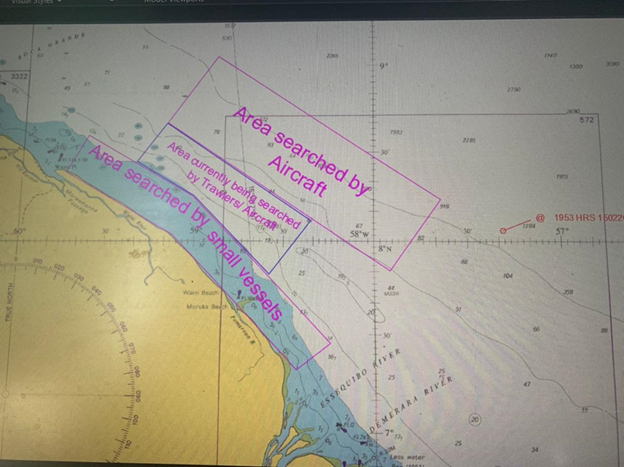 An extract from a navigation chart showing the areas searched so far. (MARAD picture)

Guyana on Wednesday asked the United States (US) for assistance to locate a drifting boat believed to have as much as 10 decomposed bodies, after aerial and sea operations failed to spot the vessel that was first seen on Monday afternoon, the Maritime Administration (MARAD) said.

“The Maritime Administration Department has published a Navigational Warning via the US National and  Geo-Spatial Intelligence Agency (NGA) informing all vessel in the general area to be on the lookout for a vessel adrift and to report any sighting,” MARAD said in a statement.

In the Caribbean region, MARAD specifically reached out to Trinidad and Tobago, alerting authorities there of the possibility that the boat might end up in the waters of that twin-island nation. “It has also informed the Administration in Trinidad and Tobago to notify vessels about the boat, since the direction of the ocean current can possibly take it to this country,” the Administration said.

The Maritime Administration Department has also sent emails to several equivalent organisations seeking their assistance in identifying the boat and the remains of those on board.

That regulatory and search and rescue partner agency said it has also asked its sister agencies for assistance in identifying the boat and remains of those aboard.

The decision to ask the US and others for assistance in locating the vessel cake after a second day of air and sea search for the boat with what MARAD said were “seemingly lifeless persons on board.”

MARAD indicated that after the crew of a Motor Tug lost sight of the vessel overnight Monday, February 15 combined efforts by the Guyana Defence Force’s Coast Guard, Air Corps, Police Force and the private sector have  not yielded any success in relocating the boat.

MARAD said two fast boats, with two 200 horsepower engines each, left Morawhanna Tuesday morning with a team that included soldiers and police. The agency said they executed search patterns offshore and inshore, that encompassed the area from the Western Boundary of Guyana’s maritime border all the way to Anna Regina, Essequibo Coast. The GDF has reportedly executed three reconnaissance flights over the initial probable area and also the expanded search area.  Another search vessel that has on board an officer and Coast Guardsmen were still at sea searching for the boat.

Public Works Minister Juan Edghill has said that authorities have estimated that between five and 10 bodies were aboard the unmarked vessel. He has said that theories included piracy and the vessel might have drifted from Africa. MARAD’s Head of Maritime Safety, Retired Coast Guard Commander, John Flores has feared that the vessel might have sank due to bad weather overnight Monday.