Gasoline, diesel prices to drop with cut in excise tax 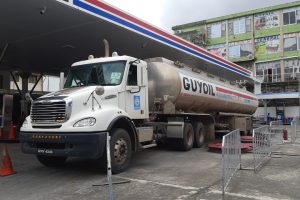 The Guyana government Wednesday night announced that the prices of gasoline and diesel were now expected to reduce as a result of a cut in the excise tax on fuels to cushion the impact of a spike in global oil prices to more than US$60 per barrel.

In order to minimise the impact on domestic consumers, particularly the travelling public as well as those productive sectors for whom fuel is an important input, Finance Minister  Dr. Ashni Singh announced Wednesday night that the excise tax rate on both gasoline and diesel  would be reduced from 50 percent to 35 percent with immediate effect.

Government usually adjusts the excise tax rate on fuel from time to time to cushion the domestic impact of world market price fluctuation, and that the current tax adjustment is being effected using this previously established mechanism.

The Finance Minister was quoted in a government statement as saying that the downward adjustments in the prices of gasoline and diesel “are in keeping with the strong ongoing commitment by President Irfaan Ali’s Government to ensure that domestic customers are protected from sharp price escalation on the world market and from cost of living increases.”

Barbados and St. Lucia have recently increased the prices of all major fuels including cooking gas due to the spike in world oil prices.

2021-02-17
Denis Chabrol
Previous: Former Environmental Chief, ExxonMobil differ on legality of flaring
Next: Father of one of the Mazaruni Prison escapees accused of harbouring, supporting them