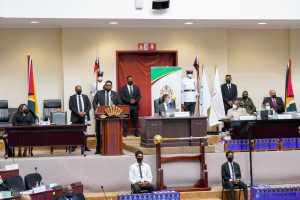 Addressing the Parliament for the first time since taking office last August following general elections in March, he announced that a new law will be passed to set up a One Guyana Commission to address concerns.

The President says the Commission will be headed by Prime Minister Mark Phillips to find practical steps to forge national unity. “The work of the Commission will be countrywide and it would listen to the free expressions of all voices concerning ways in which every Guyanese can honour their ancestral heritage while giving the highest regard to our blended Guyanese civilisation,” he said.

Priorities, he said, would include education concerning Guyana’s history and religions, ensuring equal education opportunities, employment and entrepreneurship and institutional strengthening of the Ethnic Relations Commission “to make it more effective.”  President Ali recently snubbed the ERC’s first National Conversation on Ethnic Relations, saying that his administration had not been properly involved in planning the event.

The President also announced plans to meet often with representatives of the private sector, trade unions, religious bodies , other civil society groups to address key issues that affect our nation. He said he would also be meeting with communities and community leaders to build trust and deepening relationships. “I proposed to do this personally, leading this personally every village every community. We will build trust we will win hearts and will develop in the interest of the people of this country,” he said.

However, the President did not mention the political opposition as a stakeholder. He has already  laid down the condition that the major opposition A Partnership for National Unity+Alliance For Change must first recognise the People’s Progressive Party as the democratically elected government.

In clear reference to the five-month long controversy over the March 2, 2020 general election results and the role that CARICOM and the international community played in getting the results of a national vote recount used to declare the winner, President Ali suggests that that there is no place for those who do not believe in the values of equality, peace and rule of law. “Mr. Speaker for too long or a country has been held ransom to the ambitions of partisan politics and the narrowness of partisan ambition. It is  time to set those imposters aside and to embrace in their place the virtuous cause of patriotic duty,  a commitment my government has made already. Guyana and the Guyanese people will deserve no less. They have endured enough because the decisive moment in our history with a great opportunity than  previous parliaments to make our country a better place than it has ever been,” he said.