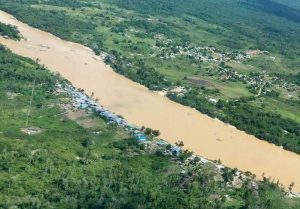 The Guyana-Venezuela border at the Cuyuni River. At the top right is San Martin in Venezuela, and the bottom left is Eteringbang in Guyana.

A draft law is to be tabled in the parliament to establish a Border Patrol Unit to secure Guyana’s Borders.

President Ali also told government parliamentarians, who were the only members present, t during his inaugural address to the Parliament,  that the aim is strengthen Guyana’s security.

“We’ll also be strengthening our ability to secure our borders with establishment of a border patrol unit, Special legislation is being drafted to give effect to this,” he said. The President gave no details of this plan.

Earlier Thursday, in an address to the opening of the 2021 Annual Guyana Defence Force Officers’ Conference, he stressed the importance of using appropriate technologies to enhance the work of the military. He also restated that plans were in train to acquire additional assets to improve Guyana’s coverage of its maritime space.

Guyana has also activated a 19 year old Shiprider agreement with the US to allow for joint operations with the US and Guyana to counter illegal trade in narcotics.

The US has similar agreements with several Caribbean islands under the Caribbean regional Security initiative.